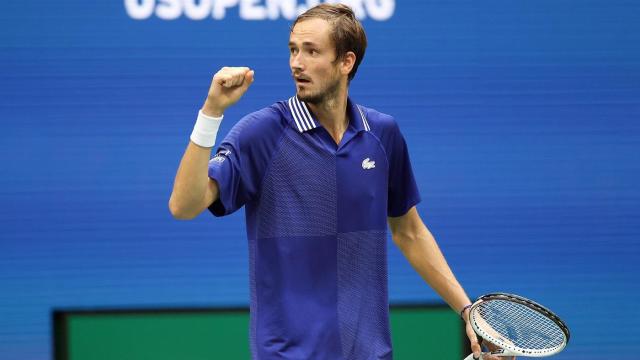 NEW YORK, NEW YORK - SEPTEMBER 12: Daniil Medvedev of Russia celebrates breaking Novak Djokovic of Serbia during the third set of their Men's Singles final match on Day Fourteen of the 2021 US Open at the USTA Billie Jean King National Tennis Center on September 12, 2021 in the Flushing neighborhood of the Queens borough of New York City. (Photo by Matthew Stockman/Getty Images)

Russia’s Daniil Medvedev won his first Grand Slam title by shattering Novak Djokovic’s hopes of completing a calendar sweep of the majors in a one-sided US Open final.

Second seed Medvedev, 25, lost his two previous Grand Slam finals but was composed throughout a 6-4 6-4 6-4 win.

Victory would have moved him clear of rivals Roger Federer and Rafael Nadal in the battle to finish with the most men’s majors, but it was the potential calendar Grand Slam which Djokovic had said would be the “greatest achievement” of his career.

Perhaps burdened by the weight of history, Djokovic looked subdued throughout as he made a high number of uncharacteristic errors.

He also looked way short of his usual physical capabilities.

To put those factors down as the sole reasons for Medvedev’s success would be completely wrong.

The Russian played smartly and confidently, drawing the errors out of his opponent with strong serving and finishing points with precise winners, as he avenged a straight-set defeat by Djokovic in February’s Australian Open final.

DISCLAIMER: The Views, Comments, Opinions, Contributions and Statements made by Readers and Contributors on this platform do not necessarily represent the views or policy of Multimedia Group Limited.
Tags:
Daniil Medvedev
Novak Djokovic