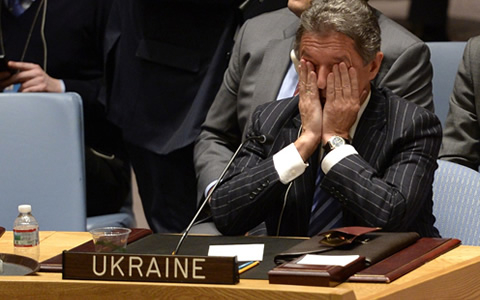 Russia and the United States exchanged threats on Wednesday at a tense UN security council meeting over the Ukraine crisis, with the Russian envoy saying the US ambassador's "insults'' are jeopardizing Moscow's willingness to cooperate with Washington on other diplomatic matters.

It was the council's eighth meeting in three weeks on Ukraine, a show of determination by Western powers to highlight Russia's diplomatic isolation over the Crimean Peninsula — even if the council is powerless to act because of Moscow's veto power as a permanent council member.

The meeting came as UN secretary-general Ban Ki-moon left for Russia and Ukraine in a bid to seek a diplomatic way out of the crisis. Ban will meet with President Vladimir Putin and other Russian officials in Moscow on Thursday, said UN spokesman Stephane Dujarric. On Friday, the UN chief will travel to Kiev for talks with the acting president and prime minister.

At the council, Russian ambassador Vitaly Churkin was once again alone in defending his country's actions in Crimea. He began his speech by celebrating the treaty signed a day earlier by Putin declaring Crimea part of Russia, saying it honored the will of the Crimean people and complied with international law.

US ambassador Samantha Power warned Russia that, two days after the Obama administration and other countries imposed sanctions on Russia, the US and its allies "are prepared to take additional steps if Russian aggression or Russian provocations continue.''

She also compared Russia's takeover of Crimea to theft. "A thief can steal property, but that does not confer the right of ownership on the thief,'' she said.

The Russian ambassador shot back: "It is simply unacceptable to listen to these insults addressed to our country.''

He added, "If the delegation of the United States of America expects our cooperation in the security council on other issues, then Power must understand this quite clearly.'' By then, Power had left the meeting to her deputy.

Churkin did not elaborate. The United States and Russia are the key players in efforts to establish peace talks in Syria, and also are involved in talks over Iran's nuclear programme.

The council also heard a briefing from Ivan Simonovic, assistant UN secretary-general for human rights, who expressed particular concern over the security of Tatars and other ethnic minorities in Crimea.

He highlighted the disappearance of a Crimean Tatar activist after participating in a March 3 protest. Simonovic said the activist was found dead March 16 and his body bore marks of "mistreatment.''

He said the United Nations is deploying a 34-member human rights monitoring mission to Ukraine, scheduled to be in place by Friday.

Simonovic said he was not able visit Crimea because the authorities there refused to receive his mission or ensure its security until it was too late. But he said he spoke to representatives of displaced Tatars and victims of arbitrary arrests, torture and other human rights violations.

Churkin dismissed Simonovic's assessment as "one-sided.'' He also blamed snipers for the killing of a Ukrainian soldier and a member of a local self-defense brigade in Crimea on Tuesday, saying the two were deliberately targeted to provoke confrontation.