US soldier kills herself

A soldier barricaded herself inside an office on a Virginia Army base before shooting herself in the head, Army officials have said.

The unnamed officer was pronounced dead at a nearby hospital on Monday.

The US Army's Fort Lee base was put on lockdown for part of the morning after a report of an "active shooter".

Maj Gen Stephen Lyons said the soldier was talking to negotiators before firing a small gun that was not her service weapon.

"This situation could've been worse," he told reporters during a press conference earlier on Monday, adding no-one else was hurt.

He described the soldier as "enraged" but did not say what about.

"We are sad for our solider in arms that she faced those types of challenges that she thought she had to resort to those kind of actions," said Maj Gen Lyons.

The soldier held the rank of sergeant first class, and was previously deployed to Iraq in 2007. Army officials said they were withholding her identity until family members were notified.

Gen Lyons told reporters the soldier was alone in a third-floor office while negotiators spoke to her from outside a closed door.

He added those talking to her believed they were making progress when they heard a gunshot. 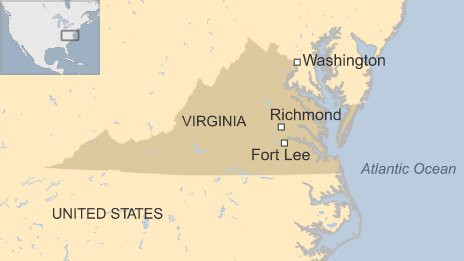 In April, three soldiers were killed and 16 wounded when army Specialist Ivan Lopez opened fire at the Fort Hood Army base in Texas before taking his own life.

The same base was also the scene of a 2009 rampage in which 13 soldiers were killed and 32 wounded by Maj Nidal Hasan.