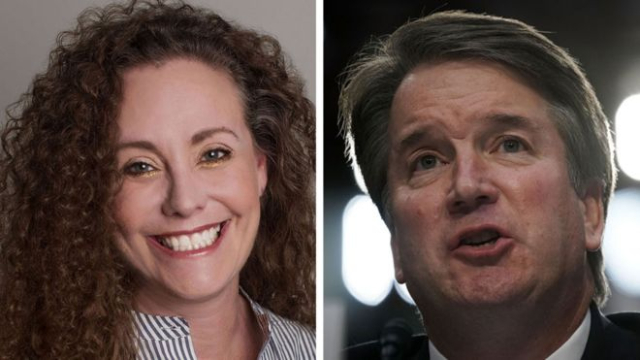 US Supreme Court nominee Brett Kavanaugh has dismissed a third woman's accusation against him of misconduct as "ridiculous".

The new claim, which is being investigated by the Senate, alleges Judge Kavanaugh committed serious sexual assault in high school.

In a statement, the judge said he did not know the accuser, Julie Swetnick, and her allegations "never happened".

He is set to testify on Thursday over other sexual misconduct claims.

In a sworn affidavit, Ms Swetnick said Mr Kavanaugh was allegedly involved in the drugging and sexual assault of girls at house parties in the 1980s.

She says she was the victim of a gang rape in 1982 at a party attended by the judge.

Ms Swetnick is represented by lawyer Michael Avenatti, who has declared his ambition to run for president as a Democrat in 2020.

Lawyers for the Senate Judiciary committee say they are reviewing Ms Swetnick's testimony.

Mr Avenatti has said his client is willing to testify before the panel.

It comes just a day before the first accuser to come forward, Christine Blasey Ford, is due to outline allegations of sexual assault by Brett Kavanaugh at a high school party more than 30 years ago.

Another woman, Deborah Ramirez, a former Yale University classmate, has said that the nominee once exposed himself to her at a dormitory party in the 1980s.

But the third allegation is more serious than the other two.

"This is ridiculous and from the Twilight Zone," Judge Kavanaugh said in a statement shared by the White House on Wednesday.

"I don't know who this is and this never happened."

The president responded to the new claims, tweeting that Mr Avenatti was a "third rate lawyer who is good at making false accusations".

Top Senate Democrat Chuck Schumer has called for Judge Kavanaugh to withdraw his candidacy in light of the allegations against him.

"At the very least, the hearing and vote should be postponed while the FBI investigates all of these allegations," he tweeted.

In his statement, the judge calls sexual assault "horrific" and says: "I have never sexually assaulted anyone – not in high school, not in college, not ever."

"The allegation of misconduct is completely inconsistent with the rest of my life. I have always promoted the equality and dignity of women."