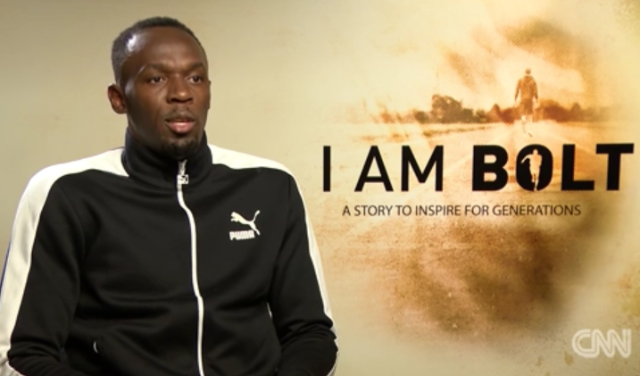 A new Usain Bolt biopic — I Am Bolt — aims to inspire future generations, but it also gave the Olympic great a lesson too.

The 30-year-old, who showed a natural talent for sprinting growing up in Jamaica, has won nine Olympic gold medals but could his haul have been even greater?

"When I started out I wasn't that serious," he told CNN in London, where he will end his sprinting career at the 2017 world championships.

"I was more relaxed and chilled and just living my life. I would say [to my younger self] 'get serious' so my career could start earlier," added Bolt as he talked about the film, which released worldwide Monday.

Bolt competed at his first Olympics in Athens 2004 but left the Greek capital without a medal. By the time he got to Beijing Bird's Nest Stadium in 2008, the stage was his as he blitzed to a trio of sprint crowns.

He signed off with another golden Games in Rio eight years later, again winning the 100-meter, 200m and 4x100m titles, and remains peerless as the world record holder over 100m and 200m.

Asked by CNN what he would choose as his super power he simply says: "I'd keep the speed."

Bolt may be aware his powers are waning so, when the effervescent superstar hangs up his spikes, what will he do next?

Bolt already gifts a chunk of his earnings through his Jamaica-based foundation which aims to help kids.

The Jamaican will also add some fizz to a champagne company after being named as Maison Mumm's 'Chief Entertainment Officer.'

It seems that "Lightning Bolt" hasn't quite done with the theater of track of field, however.

"I want to stay in track and field," he adds. "I want to focus on developing the sport."

Who would bet against Bolt breaking new ground for athletics off the track too?