Usher and SZA tour Accra ahead of Global Citizen Festival 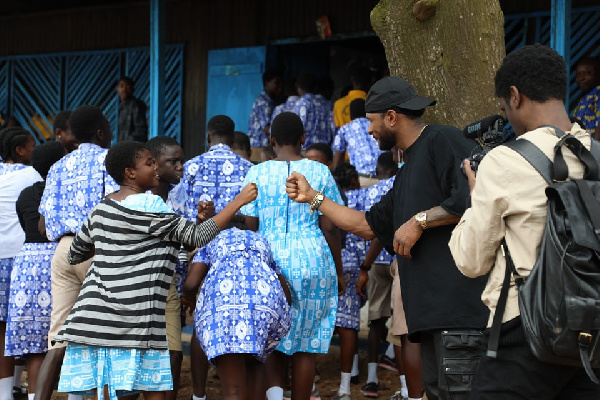 The headliners for the 2022 Global Festival, R&B superstars Usher and SZA have arrived in Ghana ahead of the event on Saturday.

On Friday, videos and pictures of the two musicians went viral on social media as they toured some parts of the Greater Accra region where the festival will be held.

In a post on Instagram, the Ghana Tourism Authority revealed that Usher and SZA visited schools and toured the Chorkor community.

The school which is an education-focused NGO in Chorkor is one of Global Citizen’s regional response partners for the End Extreme Poverty NOW campaign chosen for the 2022 festival.

The school is engaged in making education and childcare accessible in vulnerable communities.

Usher and SZA were seen engaging some students and authorities of the school, inside and outside the classroom.

Nah but really tho GHANA SLAPS 🇬🇭 🥹 everyone should come here #GlobalCitizenFestival pic.twitter.com/run9G0yqfs

Meanwhile, the 2022 Global Citizen Festival returns for its 10th-anniversary edition on Saturday, September 24, 2022, to call on world leaders and major corporations to take urgent action for girls, for the planet, and to end extreme poverty NOW.

On Thursday, at the Accra Tourist Information Centre, the Festival of Cultures was held to welcome the Global Citizen Festival.

The festival will air on Joy Prime and Joy FM on Saturday, September 24 at 9 pm GMT. It will also stream on TV3, Onua TV and TimesLive in South Africa.

It will be hosted by award-winning actor, playwright and activist Danai Gurira. Other presenters joining her include Berla Mundi, Joselyn Dumas, Michaela Coel, Nomzamo Mbatha, and Sabrina Dhowre Elba.

Additionally, activists including recipients of the 2022 Global Citizen Prize will take the stage alongside other international changemakers to inspire urgent action from the festival audience.

The 2022 Global Citizen Festival will be broadcast and streamed worldwide on YouTube, Twitter, Amazon Music, the Amazon Music channel on Twitch, and Apple Music.

The festival will also air on ABC, ABC News Live, iHeartRadio, Hulu, FX and Veeps in the United States, Albavision in Latin America, Canal+ in Africa, Bis in Brazil, Nine Network (9Now) in Australia, TimesLive in Africa and more.