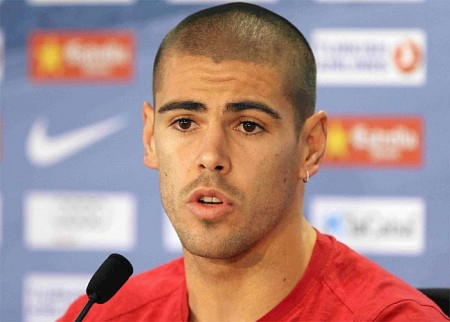 Valdes, who is set to join Manchester United after returning to fitness, came out on top in a study by the Spanish Centre for Football History and Statistics (CIHEFE).

They analysed the careers of every keeper to have graced Spain's top flight since 1928 with Valdes found to be the best in the business.

He edged out Chelsea's Thibaut Courtois, who shone during his loan spell at Atletico Madrid.

Iker Casillas came way down in 20th place, while other former Spanish showstoppers including Santiago Canizares (8th) and Luis Maria Arconada (13th) also made the list.

The study, undertaken by Vidal Vinaras de Blas, analysed the careers of the 790 keepers who have played in the league since the beginning of the 1928 league championship.

These equate to 9.10 per cent of the 8,679 footballers who have played in Spain's top flight since that year.

When compiling the list, the study considered the overall number of goals conceded, titles won, consecutive clean sheets, 'Zamora' trophies (awarded to the keeper with the lowest goals-to-games ratio over the course of the season) and total appearances.

Valdes has been training with United as he recovers from a cruciate knee ligament injury and will serve as David De Gea's No.2.