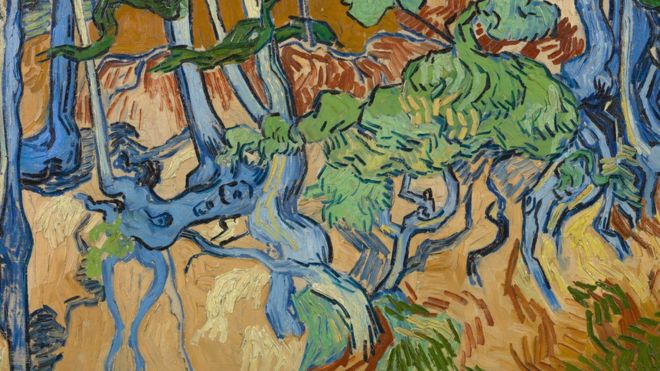 A postcard has helped to find the probable spot where Vincent van Gogh painted what may have been his final masterpiece, art experts say.

The likely location for Tree Roots was found by Wouter van der Veen, the scientific director of the Institut Van Gogh.

He recognised similarities between the painting and a postcard dating from 1900 to 1910.

The postcard shows trees on a bank near the French village of Auvers-sur-Oise.

“The similarities were very clear to me,” said Mr Van der Veen, who had the revelation at his home in Strasbourg, France, during lockdown.

Mr Van der Veen presented his findings to Amsterdam’s Van Gogh Museum, whose researchers conducted a comparative study of the painting, postcard and the hillside.

The experts, senior researchers at the museum Louis van Tilborgh and Teio Meedendorp, concluded that it was “highly plausible” that the correct location had been identified.

“In our opinion, the location identified by Van der Veen is highly likely to be the correct one and it is a remarkable discovery,” Mr Meedendorp said.

“On closer observation, the overgrowth on the postcard shows very clear similarities to the shape of the roots on Van Gogh’s painting. That this is his last artwork renders it all the more exceptional, and even dramatic.”

Mr Van der Veen visited the site to verify his theory in May 2020, once coronavirus restrictions had been lifted in France.

A ceremony was held in Auvers-sur-Oise, a few miles north of Paris, on Tuesday to mark the discovery of the apparent location.

Emilie Gordenker, the general director of the Van Gogh Museum, and Willem van Gogh, the great-grandson of Vincent’s brother Theo, were in attendance to unveil a commemorative plaque at the site.

‘The final strokes on a dramatic day’

There has long been debate over which of Van Gogh’s paintings was his last.

In a letter Theo van Gogh’s brother-in-law, Andries Bonger, described how the artist “had painted a forest scene, full of sun and life” on “the morning before his death”.

That letter has been used to support the claim that Tree Roots was Van Gogh’s final work of art.

Based on his postcard theory, Mr Van der Veen believes Van Gogh may have been working on the painting just hours before his death.

Mr Van der Veen said: “The sunlight painted by Van Gogh indicates that the last brush strokes were painted towards the end of the afternoon, which provides more information about the course of this dramatic day ending in his suicide.”

On 27 July 1890, the troubled Dutch artist shot himself in the chest in Auvers-sur-Oise. He died from his injuries a few days later.

At the time of his death, Tree Roots was not entirely completed.