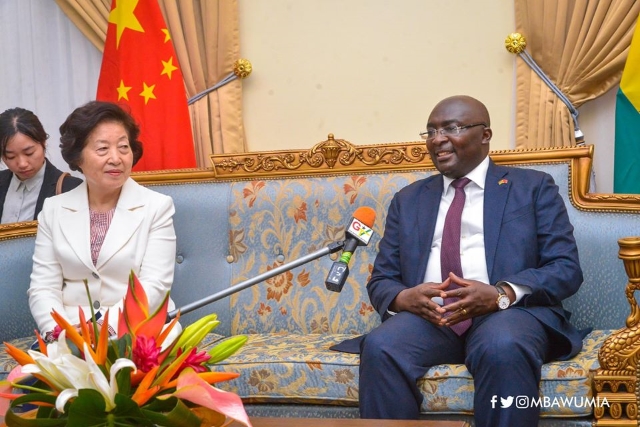 Vice Premier of the People’s Republic of China, Sun Chunlan, on Sunday arrived in Accra for a two-day official visit.

The Vice Premier and the Chinese Delegation she is leading met with Vice President Dr Mahamudu Bawumia at the Kotoka International Airport.

The delegation is scheduled to meet with President Addo Dankwa Akufo-Addo at the Jubilee House for bilateral talks.

Vice President Bawumia and some government officials, including Mr Dominic Nitiwul, the Minister of Defence, Mr Kofi Adda, the Minister of Aviation, Mr Charles Owiredu, Deputy Minister of Foreign Affairs and Regional Integration and Mr Edward Boateng, Ghana’s Ambassador to China, welcomed the Chinese Premier at the Jubilee Lounge of the airport.

During the visit, the Chinese Premier would attend the launch of some China-aided projects as well as visit health and education facilities in the country.

In a brief interaction with the media at the airport, Madam Chunlan said Ghana was a good friend of China and the two nations would celebrate 60 years of friendship and bilateral cooperation next year.

She said the bilateral relations between the two countries had been growing from strength to strength and believed her visit would afford the two countries the opportunity to implement key understanding reached at the Africa-Beijing Summit.

The visit by the Chinese Premier to Ghana is the highest level after the 2016 visit by His Excellence Yu Zhengsheng, Chairman of the National Committee of the Chinese People’s Political Consultative Conference.

The two-day tour is expected to further strengthen the bilateral friendship and cooperation between the two nations and move it to a higher level.

DISCLAIMER: The Views, Comments, Opinions, Contributions and Statements made by Readers and Contributors on this platform do not necessarily represent the views or policy of Multimedia Group Limited.
Tags:
Bilateral Cooperation
Dr Mahamudu Bawumia
Sun Chunlan