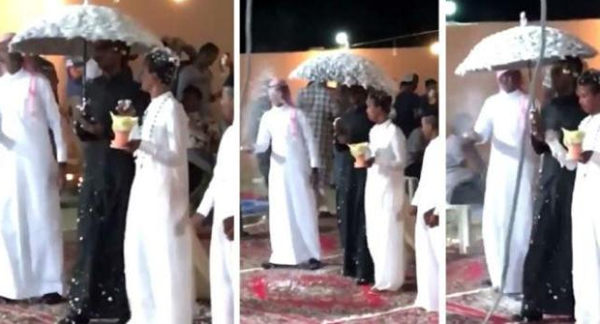 Saudi authorities are investigating a video claiming to show a gay wedding ceremony in the country, according to regional media reports.

Footage of two men in Saudi dress walking down an aisle at an alleged wedding ceremony has gone viral in the Gulf kingdom. Men surrounding the pair are seen throwing confetti.

The LGBT community in Saudi Arabia is severely restricted by the country’s ultraconservative Islamic law. Same-sex activities between men and between women are outlawed, and the rights of that community are not recognized by the government. LGBT people face punishments ranging from lashings to the death penalty.

The Saudi government’s communications office did not respond to a request for comment. Newsweek was not able to confirm the authenticity of the video footage, and some users suggested the video was a prank. However, Saudi authorities are not taking it lightly.

According to Pan-Arab news site Al-Araby, Saudi officials opened an investigation into the ceremony that reportedly took place in Aradiyat, a governorate located near the city of Mecca, the holiest site in Islam.

Police raided the ceremony and arrested those involved, a regional official told Saudi news site Al-Marsd, according to Al-Araby. Their fate is unclear.