Video: How rains kick-started manhunt for who killed the Judges - MyJoyOnline.com

Video: How rains kick-started manhunt for who killed the Judges 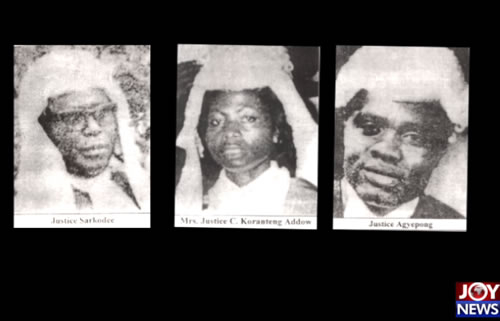 Rains. What can it ever preserve? It removes tyre tracks, washes away certificates. But on June 30, 1982, it preserved something, one thing – evidence of bodies set on fire.

Providence is yet to be fully credited for that investigative rain that helped human investigators locate the bodies of three judges and a retired army officer who had been set on fire.

There is a picture of the bodies, dehumanised by fire and deceased by gunshot.

Justice Agyepong like a broken statue with his stiff hands in the air next to Justice Cecilia who did not have time to change into a beautiful dress on her death day.

Lance Corporal Amedeka, Tony Tekpor and Dzandu, all loyalists in a military junta under Flt Lt. Jerry John Rawlings had gone into each of the homes of these judges under the supervision of an aggrieved former GIHOC Joachim Amartey Kwei, collected them as easy as collecting snails in the rainy season.

In a night of curfew and few freedoms, these men had a pass that made it possible to drive the abducted judges two hours and 50 kilometers away from their homes to a village in the Greater Accra, Bundase – their gateway to get away from this world at the rude instructions of gun shots.

So who killed the judges? In this Joy News documentary, the surviving storytellers bequeath to the generation of Instagram likes and Facebook followers, a history that must remind us that a bad democracy is better than a good autocracy.

DSP Edmund Oheneasah was a member of the special group of investigators working under the Special Investigations Board (SIB) to uncover the mystery.

His face kept a frown during the interview, revealing great brain activity as nerves twitched inside his skull to pull out of the forgotten hells of the revolution, the memories.

Former BNI boss Kofi Bentum Quantson who held a feared position had the look of fear in his eyes. He looked tired and to have known so much for so many years must be tiring.

And of course, Kwabena Agyapong, the son of a murdered judge, Justice Kwadwo Agyei Agyapong, who remembers writing a letter that day when he heard the knock on the day.

Supper for dad was on the table – unfinished. And when he stepped out to meet his night guest he was finished. It took more than three days for their bodies to be found thanks to the rain.

Weakened by the wickedness it had witnessed, the clouds shed sheets of tears to preserve evidence that kickstarted investigations into Ghana's most controversial crimes.

Watch the full documentary below.