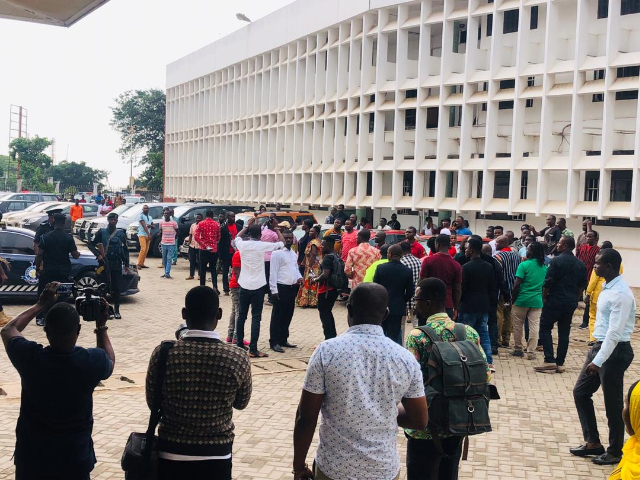 CEO of Menzgold, Nana Appiah Mensah, has been granted bail to the sum of GH¢1billion, by a Circuit Court, possibly one of the biggest in Ghana’s court.

The bail comes with five sureties, three of which are to be justified.

Nana Appiah Mensah who is standing trial for defrauding by false pretence and money laundering, made his second appearance in court Friday since his return from Dubai.

Making the case for bail, his lawyers, led by Kwame Akuffo argued, their client is not a flight risk despite being declared a wanted man by a court in January 2019.

His legal counsel explained the socialite did not abscond but had left the country to Dubai to retrieve $39 million in investments with a company in a gold deal gone bad.

But he was wrongfully arrested in Dubai on December 7, 2018 and arraigned. After spending six months there, he has since been acquitted and discharged by a Dubai court. NAM1 arrived in Ghana July 11 with investigators waiting to arrest him at the airport in Accra.

The lawyers told the court the embattled CEO’s return was on his own terms and could not be considered a flight risk.

The state did not oppose or support the bail, JoyNews court correspondent, Joseph Ackah-Blay has said. He exited the court using the judge’s chamber, the reporter said.

Earlier, desperate customers of Menzgold, had patrolled the court premises with harrowing life stories of their investments gone bad.

They are here because CEO of erstwhile gold dealership company Menzgold, Nana Appiah Mensah has their money and they want it back badly.

The CEO and socialite popularly called NAM1, also wants badly, his freedom from the state’s punitive institutions such as the court. This one is hearing a criminal case of allegedly defrauding 16,000 people of more than GH¢1.6 billion.

It is arguably the biggest defrauding case since 1995, when Managing Director of the Pyram Business Consultancies, Tanko Rahman Shadow defrauded several hundred.

Government has revealed more than 200m cedis is locked up in Menzgold. Clients, ever since the company collapsed after October 2018, have been agitating for the return of their cash even though Menzgold run an unlicensed business.

Menzgold’s business pitch was to pay depositors 7% to 10% monthly returns on special gold collectibles bought and deposited with the company. The promise has been dismissed as fantastic and unrealistic. Analysts have described it as a ponzi scheme.