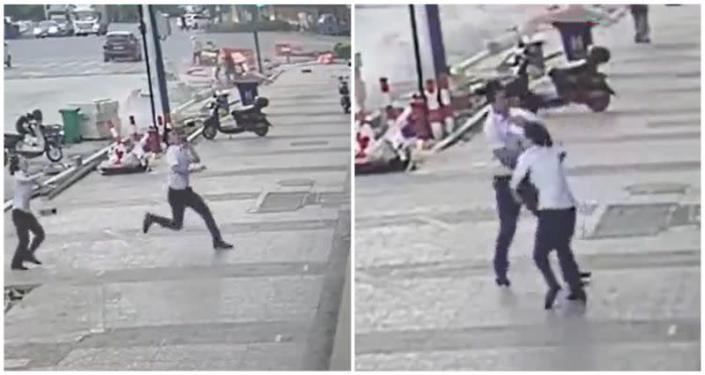 A man in Zhejiang province, China, has gone viral after he was seen on video catching a toddler who fell out of a sixth-floor apartment window.

In CCTV footage uploaded to Twitter on Friday by China’s foreign ministry spokesperson Zhao Lijiang, the man is seen on July 19 talking on the phone as he rushes towards the front of the building, briefly slipping. He then looks upwards and catches the quickly falling toddler in his arms.

The video cuts to CCTV footage of the building and shows the 3-year-old girl slipping out of the window and quickly tumbling downwards.

After receiving treatment at the Tongxiang Second People’s Hospital on Friday, the toddler was discharged.

The man told Chinese media outlets that he heard a bang coming from the top of the apartment building and looked up to see the small toddler tumbling out of the window. He described himself as lucky to have caught the girl on time and explained that it was sheer instinct.

Weibo users hailed the man as a “hero,” including Zhao, who described the Good Samaritan as “heroes among us” in his Twitter post.

“For parents with children, add a protective window or window safety valve to your home,” another user suggested.