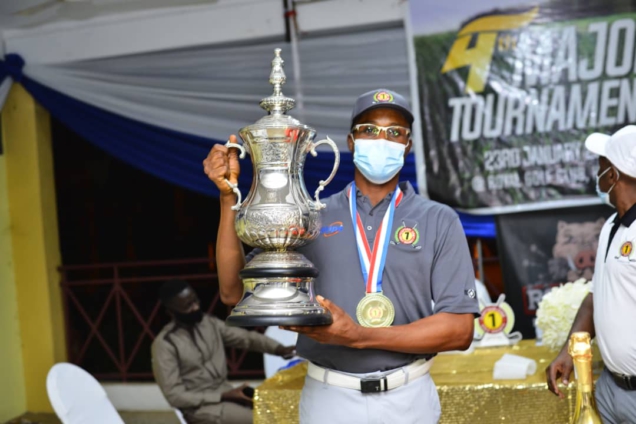 Ghana’s number one golfer, Vincent Torgah has emerged winner of this year’s Captain One Invitational Golf Championship, held at the Royal Golf Club in Kumasi.

The 4th Major Tournament with close to 100 golfers battling for glory saw the legendary golfer prove his worth once again after recording a net score of 71 to be crowned the champion.

It was, however, not easy this time for Mr Torgah as he had a hard nut in the fast-rising golfer, Kwabena Poku to crack with the game settled after a playoff over four holes.

The two golfers kept patrons and other participants at the edge of their seats as they went back and forth attempting to break the tie; a more determined Torgah eventually ‘stole’ the game after the fourth hole.

“This is the toughest challenge I have had in a year and I am so happy that I eventually won though Poku gave me a run for my money,” Torgah said.

Mr Torgah walked away with a giant trophy, a gold medal and ¢5000 worth of voucher while his closest contender Poku received ¢2500 voucher for his efforts.

Paul Chen from the host club, Royal Golf Club settled for the third position with a net score of 73 to receive ¢1500 worth of voucher and a bronze medal.

Torgah who was participating in the Captain One competition for the first time observed that, the standard of play at the event was top notch.

“From organization to the quality of golfers, this competition is one of the best in the country and would definitely get better with time, “he stressed.

He said he was looking forward to next year’s event and certain he would retain his title though must work hard for it knowing the level of play at the competition.

President of Captain One Golf Society, Pius Ayeh Appiah congratulated the winner and all golfers for showing up and ensuring a very competitive event.

“This is the most competitive we have had and despite the challenges of COVID-19, we have had an amazing turnout and it was a huge success, “he stated.

The standard he said, had been raised a notch higher with the best in the country gracing the event and having a very tough challenge in the process.

He expressed appreciation to the Royal Golf Club for hosting the event, the planning committee and sponsors R.K Cliste, Mosat Photography, Industrial Procurement Services and Flo Polo Designs for their support.

“We look forward to an exciting year for golfers as we continue with our charity events across the country aimed at bring golf to all especially the needy in society, “he stressed.

Mr Appiah revealed there would be a first Major Junior Championship in August with children from five Captain One adopted orphanages competing for glory.

“We want to expose golf to children so they grow with it and discover on their own, what it would do for them,” he explained.

Awards were also presented to Monthly Medal winners with Prince Aduakwa emerging the overall winner while James Akwaboah and George Osei came second and third in that order.

DISCLAIMER: The Views, Comments, Opinions, Contributions and Statements made by Readers and Contributors on this platform do not necessarily represent the views or policy of Multimedia Group Limited.
Tags:
Captain One Golf Society
Golf
Golf Tournament
Vincent Torgah