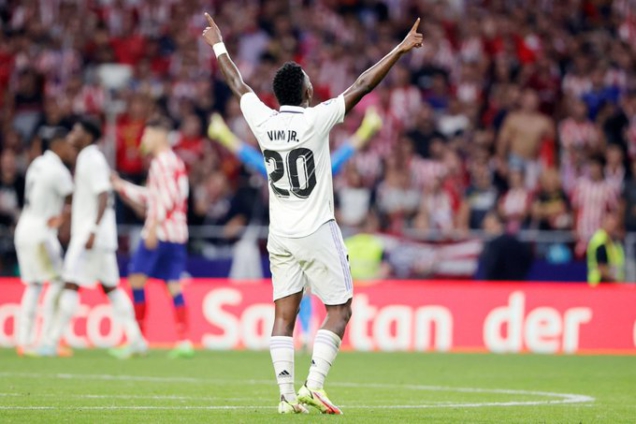 La Liga has condemned “hate speech” and says it will work with authorities after reports of racist chanting towards Real Madrid’s Vinicius Junior.

Real won at Atletico Madrid on Sunday and some opposing fans allegedly sang racist songs when entering the ground.

It comes after Vinicius, 22, said “the happiness of a black Brazilian in Europe” was behind recent criticism.

“We denounce all incidents inside and outside stadiums,” said a La Liga spokesperson.

“We work with clubs to keep our football friendly and enjoyable.”

The spokesperson added: “Hate speech has no place in La Liga and we always work with the clubs and the authorities to identify and bring to justice any such case.”

Vinicius’ celebration after scoring, in which he dances, have drawn comments from pundits in Spain recently.

Agent Pedro Bravo said during a Spanish television discussion on Vinicius that “in Spain, you have to respect rivals and stop playing the monkey”, leading to accusations of racism. He has since apologised.

Brazil international Vinicius, who has scored five goals in eight games for the European champions so far this season, listed other stars who danced in their celebrations in a statement on Friday.

“Weeks ago, some people started to criticise my dancing. But the dancing is not mine alone,” he said.

“They say that happiness bothers. The happiness of a Black Brazilian being successful in Europe bothers much more. But my will to win, my smile and the sparkle in my eyes are much bigger than that.”

Vinicius was supported by several Brazilian football stars on social media, including Pele and Neymar, while Real Madrid also released a statement condemning the pundit’s comments on Friday.

The criticism and racism did not stop Vinicius and his Brazilian team-mate Rodrygo dancing after the latter scored the opening goal at Wanda Metropolitano as Real Madrid won 2-1.