Violence against media is an offence to God – Supreme Court Judge 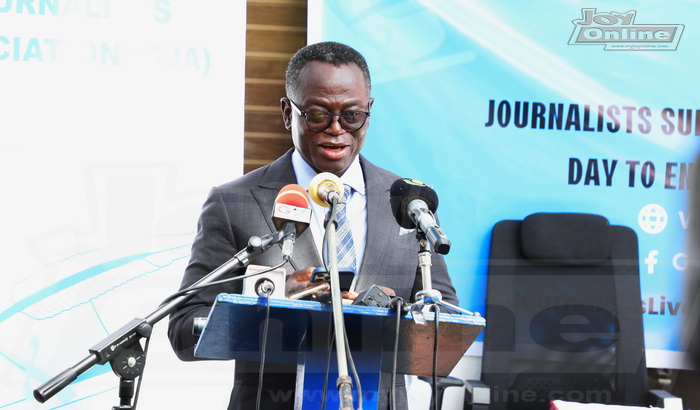 Supreme Court Judge, His Lordship Justice Yoni Kulendi has lamented the violence and abuse against Journalists in their line of duty.

His Lordship Justice Yoni Kulendi while delivering the keynote address at the launch of the Journalists Support Fund (JSF) on Wednesday, November 2 called on the leadership of the Ghana Journalists Association (GJA) to introduce more initiatives to put a stop to violence against Journalists.

He noted that there is a need for impunity against journalists to be put to a stop as no violence is justifiable.

“Needless to say crimes, aggression and violence with impunity against journalists and media practitioners is an offense against the society, the state, humanity, every democracy and freedom-loving individual on the face of the planet. In fact, I dare to say that violence against the media and journalists is an offence to God,” he said.

According to him, the launch of the fund is a worthy initiative.

“This is why there is a need for a concerted effort such as this among others to address and hopefully substantially mitigate and eventually end such impunity,” he added.

The JSF will be a support Fund for journalists who may face any abuse or violence while delivering their mandates.

It will also be used to provide legal support for journalists as well as depressed retirees during their retirement.

On his part, the GJA President, Albert Kwabena Dwumfour noted that with the establishment of the Fund, instances, where journalists are being attacked and receive no support will be a thing of the past.

“We believe that establishing the Fund will go a long way to assist journalists who are attacked by covering their medical and legal services.

“The era where journalists were assaulted but did not get justice due to lack of funds to pursue legal action will soon become history…this is an era of hope and genuine solidarity with all Ghanaian journalists,” he noted.

He also appealed to the Ghana Police to remain focused on bringing justice to Ahmed Suale’s death.

The Ghana Police Service also donated an amount of ₵20,000 cedis while the Wisconsin University also donated ₵100,000 to the Fund.

The JSF project is expected to raise some 2 million Ghana cedis to reach its objectives.

The Fund will be managed by a five-member trustee board. The National executives of the GJA also donated an amount of ₵20,000.

GJA President announced that the Association will soon release account numbers for more donations from the general public.

The launch of the Fund was organised in partnership with UNESCO to commemorate the 10th anniversary of the International Day to End Impunity for Crimes against Journalists.

Meanwhile, the GJA announced that it annual award ceremony will happen on November 12, 2022 at the Kempinksi Hotel in Accra.