Troops have opened fire in Zimbabwe's capital Harare after opposition supporters went on the rampage.

At least one man has been shot dead by the army, reports from the scene say. Another was shot and wounded by police.

Parliamentary results show Zanu-PF heading for a big majority. The presidential result has yet to be declared.

European Union poll monitors have expressed concern over the length of time it is taking to declare the presidential result.

Correspondents stress that Wednesday's violence is confined to the centre of Harare – an opposition stronghold – while other parts of the country remain calm.

Justice Minister Ziyambi Ziyambi said the army had been deployed in Harare to disperse a violent crowd and to restore "peace and tranquility".

He added: "The presence of the army is not to intimidate people but to ensure that law and order is maintained. They are there to assist the police."

Protests by MDC Alliance supporters in the city centre took an ugly turn by the afternoon.

The crowds had been there since the morning but when news came that Zanu-PF had won the majority of seats in parliament and that the presidential results were not ready, the mood turned.

They went on the rampage down Harare's busy streets towards an old Zanu-PF office with large stones, sticks and anything they could grab along the way.

The crowds chanted: "We want Chamisa." They believe the election has been stolen, and are demanding the MDC be announced as winner.

Riot police using water cannon and tear gas arrived to a chaotic scene of burning tyres and an unrelenting crowd. Hundreds jeered and pelted the police vans with stones.

This group has lost all faith in the electoral system and says they will not stop until their man is in the top job – except that's not quite how elections work.

What results have been declared?

The Zimbabwe Electoral Commission (Zec) has announced 122 seats for Zanu-PF so far, and 53 for MDC Alliance, ZBC state media reported. There are 210 seats in the National Assembly's lower house.

More than five million people were registered to vote, and there was a high turnout of 70%. 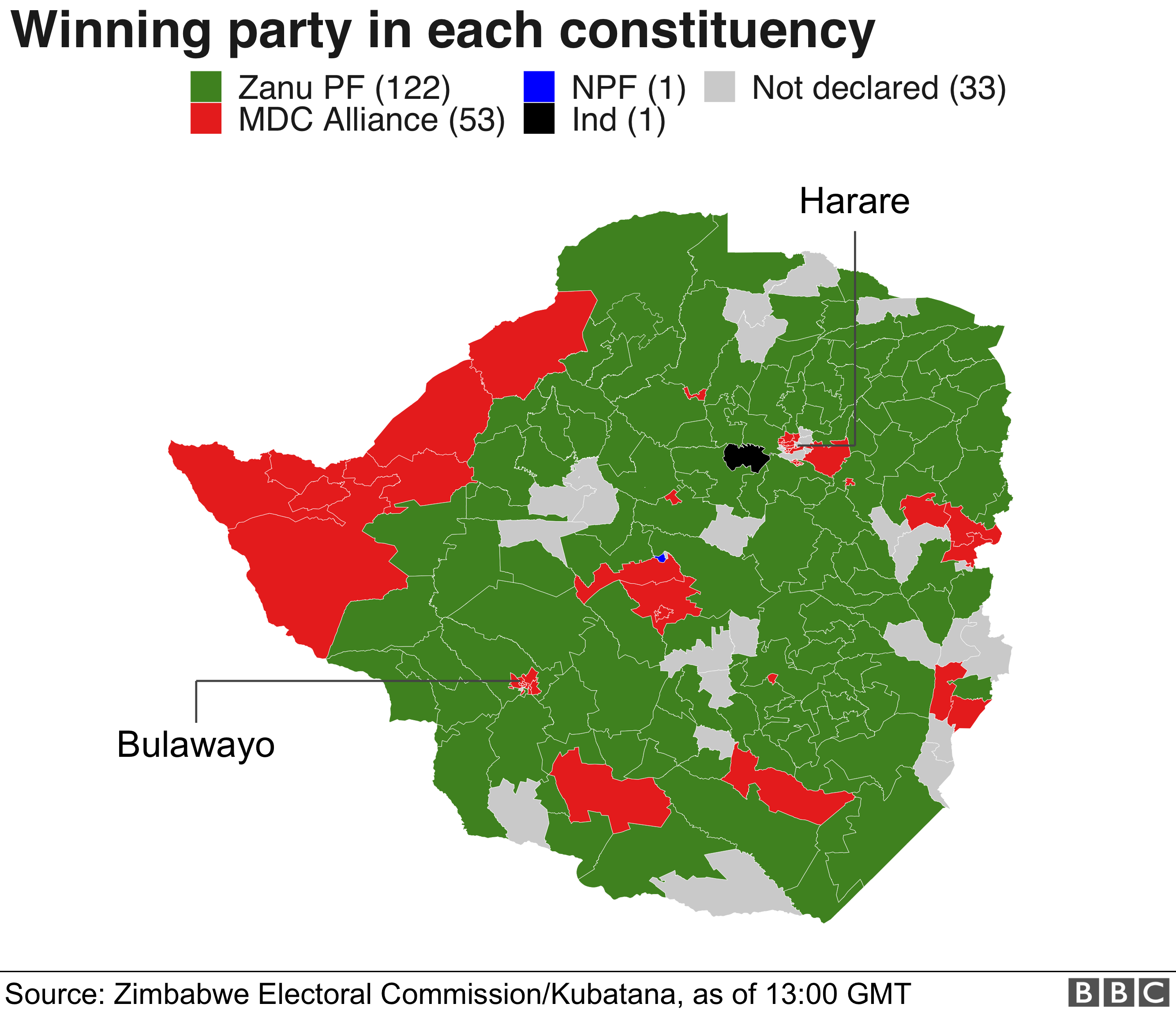 State broadcaster ZBC had reported that the electoral commission would announce the presidential results at 12:30 local time (10:30 GMT), but only parliamentary results were read out.

The BBC's Shingai Nyoka reports that the announcement on the presidential poll was not made because representatives of some of the 23 candidates had failed to turn up to verify the results.

A presidential candidate needs more than 50% of the vote to win outright. Otherwise, a run-off election will be held on 8 September.

What are election observers saying?

The EU mission has criticised the delay in announcing the presidential results. Zec has until Saturday to do so. 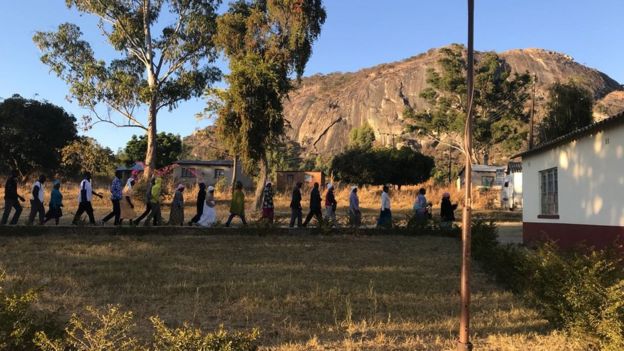 It said it had observed several problems, including media bias, voter intimidation and mistrust in the electoral commission, adding that there was an "improved political climate, but un-level playing field and lack of trust".

This is the first time in 16 years that the government has allowed EU and US election monitors into the country.

The African Union mission has said the elections "took place in a very peaceful environment" and "were highly competitive".

It added that it could not confirm opposition parties' complaints of vote-buying, intimidation by the state and bias by traditional leaders.

A preliminary report by the Southern African Development Community (Sadc) observers said the elections were largely peaceful and conducted in accordance with the law.

What are the parties saying?

The MDC Alliance said the ruling Zanu-PF party was attempting to rig the vote to allow President Mnangagwa to win, and the delay in releasing official results was unacceptable.

MDC Alliance's Tendai Biti said there was a clear attempt by Zanu-PF to interfere "with the people's will".

However, Douglas Mwonzora, a top MDC Alliance official, told the BBC's Andrew Harding that the endorsement on Sunday of their candidate by Mr Mugabe had cost the party votes. He also alleged that the ruling party had bribed voters in rural areas.

A Zanu-PF spokesman dismissed the opposition's allegations of interference, telling the BBC he had "no clue" what Mr Biti was talking about.