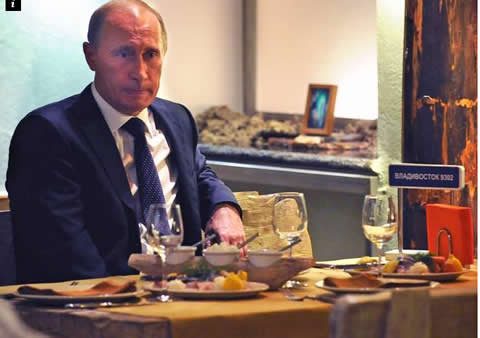 If you were Vladimir Putin, you could be forgiven for feeling a little paranoid right now, as the Western world takes turns to blame, excoriate, vilify and condemn you over the Malaysian airline disaster.

The Russian president employs a professional food taster on his full-time staff.

The news emerged from this week's meeting in London of the Club des Chefs des Chefs, the members of which prepare meals for heads of state and world leaders.

Among other leaks from their get-together, we learnt that the Queen won't go near shellfish, Barack Obama can't abide beetroot and Prince Philip prefers beer to wine with his lunch.

The distinguished list of leaders' chefs had a notable omission, though – Mr Putin, whose meals are all prepared and tasted, not by a chef but by a member of his security staff to ensure it's not poisoned.

A President's official food-taster has a thankless role. If he samples the food prepared for his master, gets sick and dies, he may get a murmured "Good job…" from the boss, but little more.

The job, however, has been popular for centuries. Roman emperors employed trusted slaves to be their praegustator, not always effectively (when Claudius died after being given poisoned mushrooms in 54BC, his taster Halotus was fingered as a suspect). So did the Egyptian pharaohs and the emperors of Byzantium and China.

The Mauryan empress Queen Durdhara died when she ill-advisedly ate some food prepared for her husband, Chandragupta, who went on to unify India into a single state. You had to be on your toes in 320BC. And those expert poisoners the Borgias employed tasters to make sure their own methods weren't applied to themselves.

Adolf Hitler was a vegetarian, but didn't take any chances that some assassin might toxify his favourite dish of asparagus, peppers and cauliflower. A woman called Margot Woelk was brought a plate of food to test, at noon every morning of his last two years alive. If she didn't fall ill, the food was packed up in cartons and delivered to his military HQ.

In 1978, the Romanian dictator Nicolai Ceaucescu brought a food taster with him when on a state visit to Buckingham Palace – and brought his own linen, too, in case someone tried to, you know, spike his duvet cover.

Saddam Hussein, a man with more enemies than brain cells, kept several private tasters on his staff (and never forgave his homicidal son Uday for murdering his favourite one). The official sushi taster of the Japanese royal family was declared redundant in 1989, and not replaced.

How do you apply for the job? What qualifies you – a knowledge of poisons, and the ability to recognise tell-tale tastes? Sad to relate, the modern taster doesn't need to sample the actual food any more. They become so involved in its preparation, the chances of any toxic infiltration by an enemy are nil.

According to Joseph Petro, a former Secret Service agent under George W Bush and the author of the book Standing Next to History, the US president doesn't eat anything that hasn't been prepared by White House stewards and served by a White House heavy in waiter's uniform. If the Prez is attending a foreign summit, his minders find out what's on the menu before the trip, and fly the ingredients over from Washington.

Anyone dining with Mr Putin these days will probably find that the same rule applies – and that he's brought his own salt, pepper, HP sauce, bottled water and napkin along with him. Just to be on the safe side, you know?