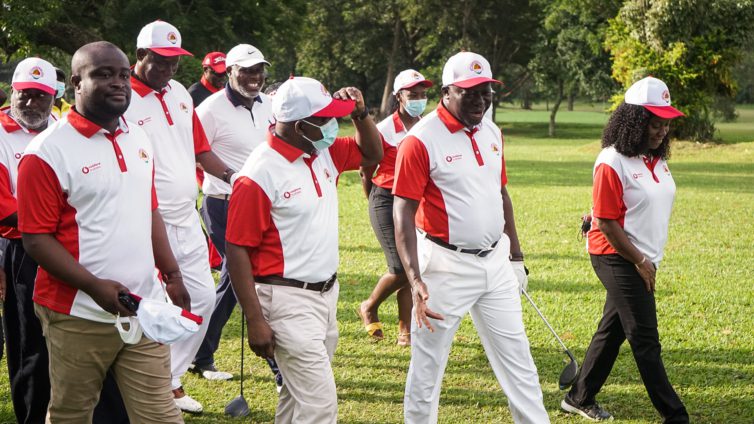 Chief Executive Officer of Vodafone Ghana, Patricia Obo-Nai, said after 6 years of cordial engagements, Vodafone deemed it necessary to renew the contract and extend the brand’s relationship with the tournament.

She made this known when the Head of Operations of the Royal Golf Club, Kumasi, Prof B.K Baiden introduced Vodafone Ghana as sponsors to the Asantehene, at the Manhyia Palace.

The CEO added that apart from sponsoring the tournament, Vodafone Ghana will use the opportunity to promote sustainable development in the region through its ‘Ashanti Month’ campaign dubbed ‘Boa Asanteman’.

“Vodafone started sponsoring the tournament six years ago and we announced last year that the deal was smooth. So we proposed the renewal for another five years with Asanteman, Manhyia, and the Royal Golf Club. We’re partnering with Tafo Government Hospital to organize a health screening and give out national health insurance cards. There will be an ultra-scan for pregnant women, in addition to a health walk. We will also visit four secondary schools to teach them safe usage of the internet,” she said.

Madam Obo-Nai added that senior-level tuition on internet usage for some 100,000 students will also be carried out. Additionally, Vodafone in collaboration with the Otumfuo Foundation will plant trees in June.

“In partnership with the Otumfuo Foundation, we will plant 2000 trees in June as it is a month of tree planting,” she said.

On his part, Otumfuo Osei Tutu II expressed appreciation to Vodafone Ghana for the sponsorship renewal. He also charged the Royal Golf Club and Vodafone Ghana to support each other for the success of the partnership.

He said, “The plans you’ve announced will promote the state of women’s health as well as education, and we’re grateful. I’m also grateful for the renewal of the contract and believe the policies will be good to benefit both parties. So, ensure that as they sponsor you, you also help promote their business.”

For the past 60 years, every Asantehene has consistently hosted the Golf Championship. The sport is touted as one of the leading and most popular in Kumasi, aside from football.

In 2017, Vodafone Ghana signed a five-year strategic partnership with the Royal Golf Club, which has benefitted both customers and non-customers of Vodafone in the Ashanti Region.

Through this partnership, Vodafone introduced various initiatives that have had a great impact on the lives of the people. These include a free health screening activity dubbed Healthfest, clean-up and donation exercises, among others.

Most importantly, Vodafone Ghana has established a fruitful relationship with His Royal Majesty, Otumfuo Osei Tutu II and the people of the region through its ‘Ashanti Month’ campaign with the Asantehene Golf Championship as its ultimate highlight.