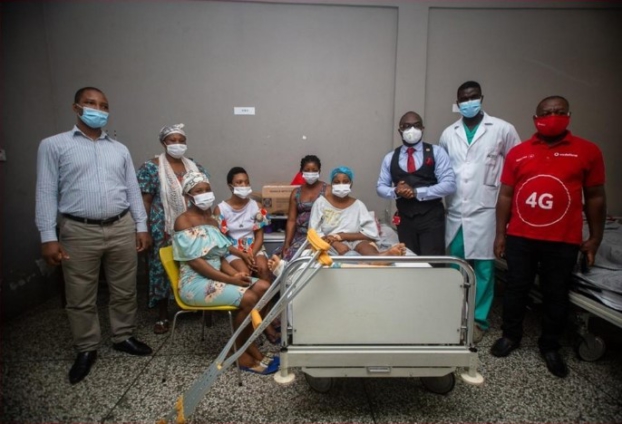 The family of three sisters who were involved in a gruesome accident have expressed heartfelt gratitude to the Vodafone Ghana Foundation for settling their medical bills during the Foundation’s annual ‘Homecoming’ initiative.

Theresa, Rita and Priscilla Owusu, are among the over 300 patients who benefited from the 2020 edition of Vodafone Homecoming which was rolled out in three phases across the Northern, Middle and Southern belts respectively between July and September.

According to their parents, the three sisters were involved in a serious accident that left them with severe injuries, whose cost of treatment overwhelmed them.

However, Vodafone Foundation came to their aid and paid the hospital bill of Rita, who had been held at the 37 Military Hospital more than a week after discharge because they could afford her bills.

The Foundation also accepted to pay for the surgery of Theresa, who underwent surgery at the St Joseph’s Hospital, Koforidua, to treat her fractured legs and also footed the bills of Priscilla, the oldest sister, who was being treated for brain injury.

“Vodafone Foundation’s timely intervention has turned the lives of my children around. We didn’t expect such a kind gesture from them. The family was excited when we received a call from Vodafone Foundation that they will pay in full their bills. We will forever remain grateful to them”.

Rita, Theresa, and Priscilla also expressed gratitude to Vodafone Ghana Foundation for bringing relief to them, adding that they had no hope of help coming their way.

“We are most thankful to Vodafone Foundation for paying for our surgeries” they three sisters expressed.

Explaining why the Vodafone Ghana Foundation came to the three sisters’ aid, the foundation Lead, Rev Amaris Nana Adjei Perbi, said they were touched by the plight of the sisters after reading their story in the Daily Graphic.

The 2020 edition of the Homecoming Initiative has settled the medical bills of more than 300 insolvent patients in various regional and district hospitals across the country, to enable them to attain their freedom and be reunited with their families.

Beneficiaries of the gesture included patients with medical conditions such as fractured spine and limbs from motor accidents, fibroid, unconsciousness as a result of convulsion, eye problems, and caesarian session, among others.

The initiative also saw the Foundation renew the National Health Insurance Scheme cards or register for new ones for beneficiaries and as well gave beneficiaries COVID-19 farewell packages.

DISCLAIMER: The Views, Comments, Opinions, Contributions and Statements made by Readers and Contributors on this platform do not necessarily represent the views or policy of Multimedia Group Limited.
Tags:
Vodafone Ghana Foundation
Vodafone Homecoming