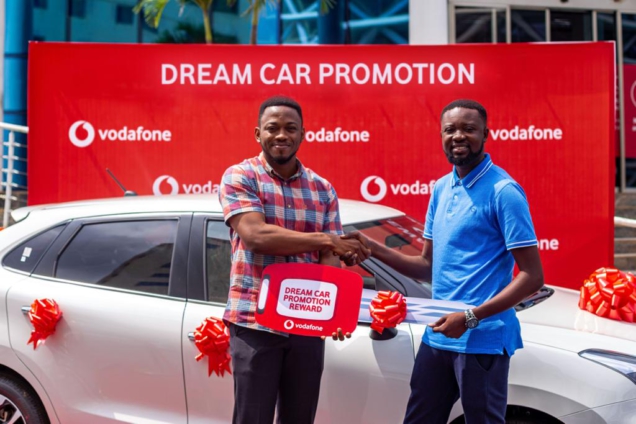 Vodafone Ghana has presented a brand-new Toyota Starlet to Joel Barnor, a mobile phone dealer who emerged as the winner of the Vodafone Dream Car Promotion.

The Vodafone Dream Car promotion, which was launched to reward Vodafone Ghana customers for their loyalty, has exciting prizes, including mobile phones and a brand new car as the ultimate prize.

This is the seventh cycle of the popular promotion, which has seen hundreds of people win phones and other exciting prizes every year.

The 34-year-old, who resides in Dansoman, was still in awe and disbelief at the short presentation held at the Vodafone Ghana Headquarters in Accra. In a brief remark, he said:

”I could scarcely believe it when I was told I had won. My wife is still in disbelief, but she will believe it’s real when I drive home in this car. I am extremely excited and can’t thank Vodafone Ghana enough for this gesture. I am grateful and God bless your efforts.’’

Speaking about the promotion, David Umoh, the Director of the Consumer Business Unit at Vodafone, explained,

“As a customer-centred business, we are always looking for ways to reward our customers for their patronage and loyalty. The Dream Car Promotion is one of the many channels we are using to express our appreciation. We are excited that this promotion is transforming the lives of the many winners, including Joel and his family.”

He went on to encourage Vodafone Ghana customers to remain connected to the network to enjoy the many products, services and promotional offers that the brand has to offer.

Joel is one of the thousands of Vodafone Ghana customers who took part in the seventh edition of the Dream Car Promo, which ran for six months starting in October 2021.

The point-based promotion rewards customers with brand new iPhones each month and the sleek, brand-new Toyota Starlet as the grand prize for the customer with the highest prize at the end of each cycle.

To win the promotion, participants had to answer up to five questions per day to build points.

The eighth cycle of the Dream Car promotion started in April this year and is accessible to all Vodafone Ghana customers, who can subscribe by simply dialling *2018#.

DISCLAIMER: The Views, Comments, Opinions, Contributions and Statements made by Readers and Contributors on this platform do not necessarily represent the views or policy of Multimedia Group Limited.
Tags:
Joel Barnor
Vodafone Dream Car Promo
Vodafone Ghana