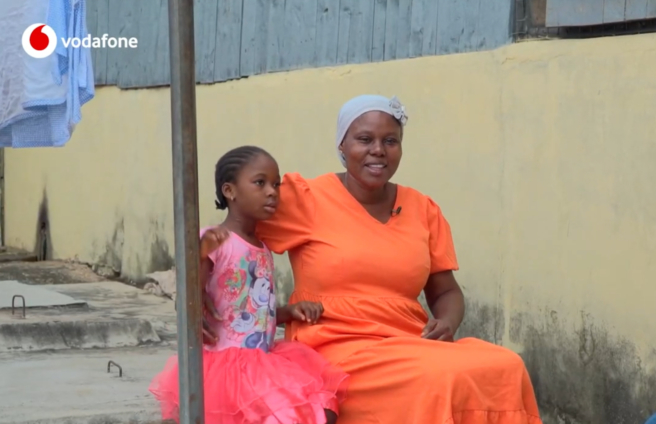 The Vodafone Healthline team has visited young Christabel, a native of Takoradi in the Western Region, who received financial aid from Vodafone Ghana to undergo surgery two years ago.

She had accidentally swallowed a calculator battery.

The visit was featured in the third episode of the Vodafone Healthline Spin-off Edition, which is a documentary-style recap of notable past Healthline moments and the beneficiaries of Vodafone Ghana’s medical interventions.

Christabel’s parents described how health professionals originally dismissed their daughter’s condition because they believed the battery would naturally pass out of her system.

After two days of pain and being unable to swallow, she got an X-ray at a different facility, which revealed that the object was still stuck in her throat and that she would need surgery to get it out.

A second medical check showed that the battery had hurt her oesophagus, which means that any food or liquid she ate or drank went into her trachea, or windpipe, and then into her lungs.

Christabel had to be fed through a tube placed in her stomach due to a lack of cash to speed up surgery. Her mother recounted how painful and expensive this process was.

Christabel was able to have a successful surgery thanks to Vodafone Ghana’s intervention. Two years after the surgery, the Vodafone team met a healthy Christabel, who can now eat and drink properly.

In the third episode, Drs. Aba Folson and Kweku Yalley recapped one of the most famous topics discussed under the Myth Buster section; the idea of chocolate as an aphrodisiac.

Ama Folson admitted that while studies had suggested that eating chocolate might cause the production of some chemicals that are excellent for the overall well-being of people, this had not been proven scientifically. Dr Kwaku Yalley agreed with this assertion.

The episode also touched on the importance of nutrition to support one’s ideal body weight range. Dr Ayisi Addo, a nutritionist, said that nutrition is one of the critical determinants of health.

She explained that almost 80% of diseases can be prevented through healthy nutrition, physical activity, and a healthy lifestyle.

She recommended that women between 15 and 49 years of age maintain a healthy weight range, especially when pregnant, to ensure the health of their children.

The Vodafone Healthline Spin-Off edition airs on Mondays and Tuesdays.

DISCLAIMER: The Views, Comments, Opinions, Contributions and Statements made by Readers and Contributors on this platform do not necessarily represent the views or policy of Multimedia Group Limited.
Tags:
Vodafone Ghana
Vodafone Healthline