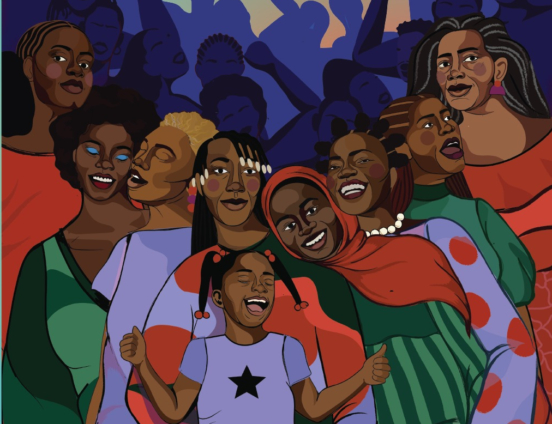 On December 18, over 300 people will gather at Nubuke Foundation to celebrate the global launch of the ‘Voices Audioplay’ directed by poet Aja Monet.

The free event will feature an immersive listening experience of the debut audioplay, food and drinks, a curated art exhibition, sounds and vibes by Ghanaian women DJs, and a panel with special surprise guests.

Voices will partner with over 30 local and global organisations including Sorted Chale, Black Girls Glow, GirlTrek, Change.org, Trybe, Drama Queens Ghana, Surf Ghana, Power To Girls, Afrodite and friends and Studio 189 among others.

Black women in Ghana, on the continent and across the diaspora will be in attendance, as well as artists in solidarity like V-Day Founder V (formerly Eve Ensler) and V-Day Board member Rosario Dawson.

While hundreds of people from the diaspora at large gather every year to celebrate and return, there is a major gap in literary and theatre-based events to engage in the social, political, and cultural significance of returning to Ghana.

The Voices Audioplay will provide a unique space for people to gather, engage the meaning of return and diaspora, and envision a world where African women of the continent and diaspora are centred while collaborating and loving each other across cultures, borders, and customs.

“This piece will ultimately be in service and for Black women all over the world, to speak to the complexities of our experiences as well as a collective vision for change, justice, compassion and solidarity.

When VOICES began in 2020, it was commissioned as a new play and campaign to take the place where The Vagina Monologues was once centred in the global movement to end violence against women and girls.

She began by inviting Black women to share their stories and participate in a call for submissions.

After receiving over 800 submissions, 25 final poems were selected to make up the VOICES Audioplay.

Two years of gathering stories, engaging in collective study and collaborating with Black women actors and musicians has led to the Voices Audioplay which is now being shared with the world.

Voices is an interdisciplinary audio play and campaign grounded in Black women’s stories by V-Day to unify the vision of ending violence against women across the African Continent and African Diaspora. Its goal is to use art to embody and inspire solidarity-making in the collective imagination. The Voices audio play is Creative Directed by Aja Monet, produced by Hollis Heath and composed by LeahAnn “Lafemmebear” Mitchell.

V-Day is a global activist movement to end violence against all women, girls and the planet.

For 25 years, V -Day has unleashed vast grassroots, anti-violence work on college campuses and in communities – visionary work that has been survivor-led and focused, all the while revealing the power of art and activism to change culture and systems.

Founded by V (formerly Eve Ensler), activist and author of The Vagina Monologues, V-Day has raised collective consciousness about how violence and gender intersect.

The Vagina Monologues and other artistic works curated by V-Day have been staged across the world by local activists, survivors and artists, raising over $120 million dollars for grassroots anti-violence groups, rape crisis centres, domestic violence shelters, and safe houses, shattering taboos and changing the way activists make a change in their communities.

V-Day’s campaigns include the City of Joy, a revolutionary centre for women survivors of gender violence in the Democratic Republic of Congo, which has graduated over 1800 women leaders; One Billion Rising, the largest mass action to demand an end to violence against women in history; and now Voices.

This year, its 25th anniversary, V-Day is shifting away from The Vagina Monologues as a centrepiece for our movement work to create space for Voices.

DISCLAIMER: The Views, Comments, Opinions, Contributions and Statements made by Readers and Contributors on this platform do not necessarily represent the views or policy of Multimedia Group Limited.
Tags:
Aja Monet
Nubuke Foundational
The Vagina Monologue
Voices Audioplay