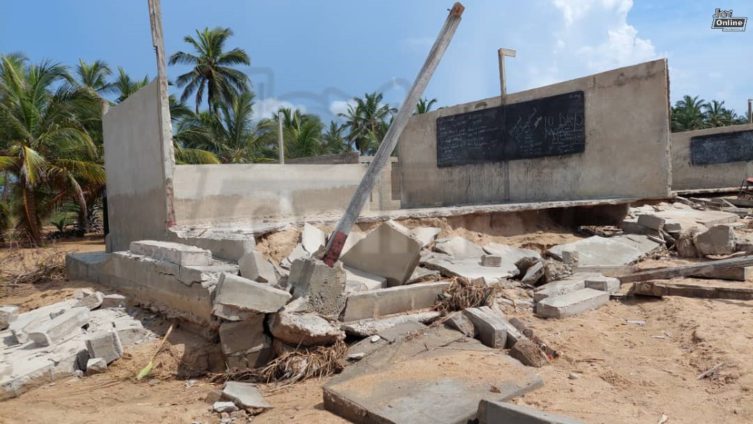 Two hundred and thirty-four students of the Fuveme Basic School have been compelled to pack themselves in two classrooms for classes after tidal waves destroyed more than 200 structures along the coastline of some communities in the Volta Region.

The community lost its first school to the sea in 2016 and constructed a new one at its present location until it was submerged again on Sunday.

In an interview with JoyNews’ Maxwell Agbagba, a teacher revealed that the tidal surge this time destroyed four classroom blocks, leaving only two in good shape.

The teacher added that as a result, students from Kindergarten one to JHS two study in one classroom while final year students occupy the second classroom as they prepare for their final exams next week.

“This tidal wave has brought a lot of devastation. It has destroyed about 400 houses, people do not have a place to sleep and that is the problem we are dealing with now,” he said.

Meanwhile, representatives of the Ghana National Association of Teachers (GNAT) visited the site to ascertain the level of damage caused by the storm surge.

The Municipal Secretary to the Association, Koku Mensah called on relevant authorities to find a sustainable solution to the incident since tidal waves have been recorded in the area on numerous occasions.

“This is not the first time I am coming here to make an observation after such an incident. I was here in 1999, 2016, and this year. But nothing has been done and what has happened today is more devastating than ever before.

“Look at the structure of the school, it has been destroyed by the waves. Meanwhile, final year students are to sit for their final exams next week,” he lamented.

DISCLAIMER: The Views, Comments, Opinions, Contributions and Statements made by Readers and Contributors on this platform do not necessarily represent the views or policy of Multimedia Group Limited.
Tags:
Fuveme Basic School
Students
Tidal wave