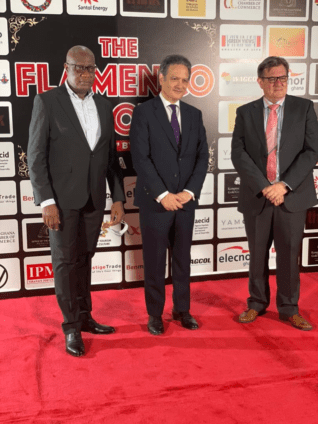 The West African and Gulf Company Limited (WAGCOL) and Comet Ghana limited, as part of their objectives to promote business investment and cultural cooperation between Ghana and Spain, have sponsored the Flamenco Show initiated by the Embassy of Spain and the Ministry of Tourism, Arts and Culture.

The Flamenco show, a world-class show dubbed ‘A Tierra’ by a famous dancer, Sara Neito, is to link the Ghanaian society and Spanish society by exhibiting the rich culture of Spain through dancing, singing and music with a vigorous drama.

The show, which had WAGCOL as one of its main promoters was performed by the Flamenco Group from Spain which is expected to push forward cultural exchanges and cooperation between the two countries.

Delivering a speech at the event, Director of WAGCOL, Alex Oman, mentioned that the show forms part of efforts to promote the rich culture of both countries and create an avenue where citizens of both nations will have the platform to learn from one another through arts and culture.

He disclosed that the two companies will add arts and culture to the sectors they want to explore opportunities in, despite showing interest in other sectors of the economy.

“It is a big honour to be part of this important event.  This is not the first time of having such event but the unique aspect of todays’ event is having Flamenco Cultural Group from Spain. We have invested in many business sectors in Ghana and the Sub-region. We will continue with our investment in other sectors of the economy, both commercial and manufacturing,” he said.

Mr. Oman added that he is hopeful of more cooperation between Ghana and Spain, further saying, he wants the next edition of the event to be hosted in the European country.

WAGCOL is duly a registered company established in 2010 with its main objective to import and distribute quality and affordable alcoholic and non-alcoholic beverages such as Spirits, wines, beers and juices, food products into the Ghanaian market.

It is the main distributor of Don Simon products in Ghana and also another international brand such as Cody’s Mateus wine, together with its brands such as Shaka Vodka and Holy communion wine.

The commitment of WAGCOL to remain the market leader is sustained by the vast experience of its Parent company- the International and Diversified Group, Venerable Capital Group with its distribution channels across Europe, Asia and Africa.