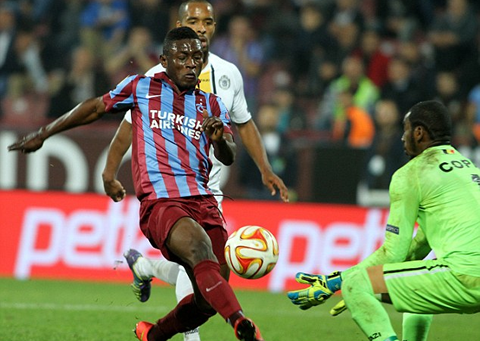 Trabzonspor forward Abdul Majeed Waris is the latest player outside the initial 23-man list to join the Black Stars camp.

Ghana coach Avram Grant had named his squad for the opening qualifying match to the 2017 Africa Cup of Nations against Mauritius without the fit-again diminutive attacker.

Waris’ progress this past season was derailed by an injury just about the Christmas period which deprived him an opportunity to feature in Ghana’s silver medal campaign at the 2015 Afcon in Equatorial Guinea.

Waris was handed a late call by Grant as a replacement for Chicago Fire attacker David Accam whose club have reportedly refused to release him.

Prior to Grant’s squad announcement, Chicago Fire were in doubt Accam was going to be on national team duty as they were yet to receive an invitation letter from the Ghana FA.

”We have heard nothing from Ghana officially. I guess that’s a no, unless they decide to send him [a late invite],” Fire coach Frank Yallop had told reporters a few days ago.

Meanwhile, Waris, 23, has already joined the team in training at the Jean Marc Guilliou Academy in preparations towards the game against Mauritius.

Ghana hosts Mauritius at the Accra Sports Stadium on June 14 but will first play in a test match against Togo on Monday, the 8th.