We are going to see more burning of excavators - Mireku Duker - MyJoyOnline.com

We are going to see more burning of excavators – Mireku Duker 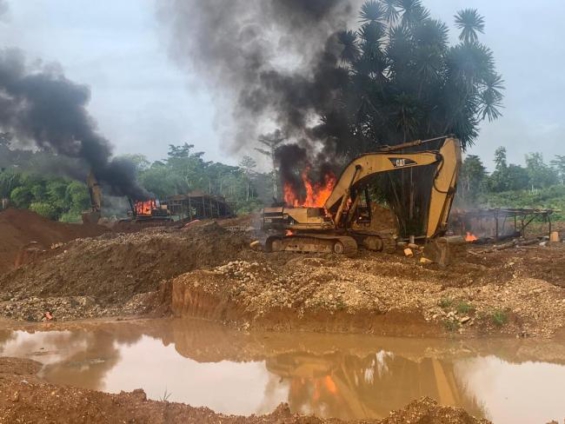 An excavator being burnt as part of Operation Halt

The Deputy Lands Minister in charge of Mining has reiterated government’s commitment to eradicate illegal mining, popularly known as galamsey.

George Mireku Duker interacting with the media on Monday, stated that excavators of miners who are still operating in areas marked as ‘red zones’ will be burnt.

He insisted that the move is to halt the activities of galamsey operators which are damaging the country’s water bodies.

As such, miners who divert a river course or put an excavator on a river bed and mine to the detriment of the country’s heritage, will have their excavators burnt.

The Deputy Minister revealed that the recalcitrant miners permanently remove the control board of the excavators when the security personnel see them on-site and attempt to arrest them.

“This makes it impossible to move the machine from the mining sites; hence there is no alternative than to burn the excavators,”

“If we don’t burn the machines, the miners will come back and use them at night, put mercury in our sources of drinking water and kill people indirectly.”

“So if the person intends to kill you, then you need to destroy the accoutrement that they use for that destruction,” he explained.