'We are going to win the last game and go through' - Andre Ayew - MyJoyOnline.com 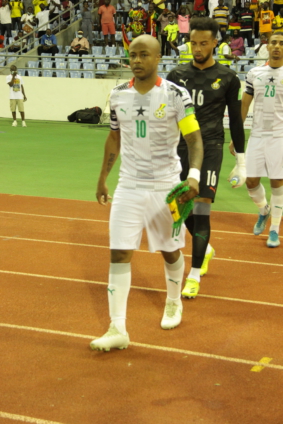 Captain of the Black Stars, Andre Ayew is confident Ghana will beat Comoros in their final group game to seal qualification to the next round of the 2021 Africa Cup of Nations.

The Black Stars failed to take their chances against Gabon in the second group game in Group C on Friday as they were held to a 1-1 draw by the Panthers.

However, Milovan Rajevac’s side still has a chance to advance to the knockout stages should they win their final group game on Tuesday, January 18.

Speaking in his post-match interview after the keenly contested game at the Ahmadou Ahidjo Stadium, Ayew assured fans they are going to beat Comoros to book their place in the Round of 16.

“We are Ghana,” he insisted. “We are going to win the last game and go through,” the Man of the Match said.

The Al-Sadd forward also detailed his disappointment with the Gabon team for failing to play fairly in the build-up to their equalising goal.

“We had the ball and we put it out intentionally because our player was on the floor.

“So what do we do? When the ball is coming, you take the ball, Gabon, and give it back to Ghana. [It is as] simple as that!

“So, we were waiting for the ball to come back but the ball was not coming back and they played and that’s how they got their only open chance of the game. That is it.

“It is very small of them. I am disappointed in them.”

Ayew scored in the 18th minute of the game with a cracking strike from outside the penalty box before Jim Allevinah levelled the game with just two minutes to go.