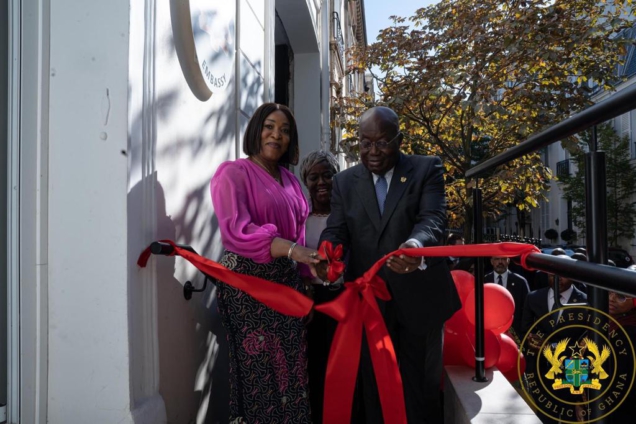 The Minister for Foreign Affairs and Regional Integration, Shirley Ayorkor Botchwey has intimated that government attaches strong importance to the welfare and interests of citizens.

The minister made the remarks at a brief ceremony in Paris when she joined President Akufo-Addo to commission a newly-renovated embassy for the Republic of Ghana, located in the prime area of the 16th Arrondissement of Paris.

The foreign mission is housed in the famous Villa Saïd named after Mohamed Sa’id Pasha, a former Prime Minister of Egypt.

Upon President Akufo-Addo’s directive , the refurbished facility was included in the list of Ghana’s Diplomatic Missions to benefit from the Société Générale Bank credit facility acquired to purchase, construct, reconstruct and/or renovate Ghana Missions abroad.

Taking her turn to address the gathering at the inaugural ceremony, Shirley Ayorkor Botchwey expressed gratitude to the President for his support towards the execution of the project. The minister also singled out Ghana’s Ambassador to France, Anna Bossman, for her determination which has seen to the successful completion of the project.

According to her, the Paris Mission is significant and touches all aspects of diplomacy – bilateral, multilateral and economic diplomacy in all its forms and expressions in the prosecution of Ghana’s foreign policy agenda.

“To the Ghanaian community, this is your home. By this renovation, your government is sending a strong message of the importance we attach to the interests of our citizens, which is the priority of our diplomacy. The beautifully-fitted consular section should complement the high-quality services we provide for your satisfaction. Enjoy it as you cooperate with our officers, who are ever ready to assist you in all that you need. Let us keep the flag of Ghana high,” Shirley Ayorkor Botchwey said.

Meanwhile, President Akufo-Addo who is also in France has received an award of Doctor Honoris Causa conferred on him by the reputable Sorbonne University.

The Foreign Affairs Minister could not hide her joy over the accolade as she indicated that the President’s “service and sacrifices to the nation and humanity will always be recognised”. She is hopeful this example would spur citizens to do more for God and country.

It is important to note that France is one of the first countries that Ghana established diplomatic relations with following the country’s independence in 1957.

DISCLAIMER: The Views, Comments, Opinions, Contributions and Statements made by Readers and Contributors on this platform do not necessarily represent the views or policy of Multimedia Group Limited.
Tags:
Foreign Affairs Ministry
President Akufo-Addo
Shirley Ayorkor Botchwey