We can advise Akufo-Addo on how to fix the economy; but he still can't do it like Mahama - Techiman North MP - MyJoyOnline.com

We can advise Akufo-Addo on how to fix the economy; but he still can’t do it like Mahama – Techiman North MP 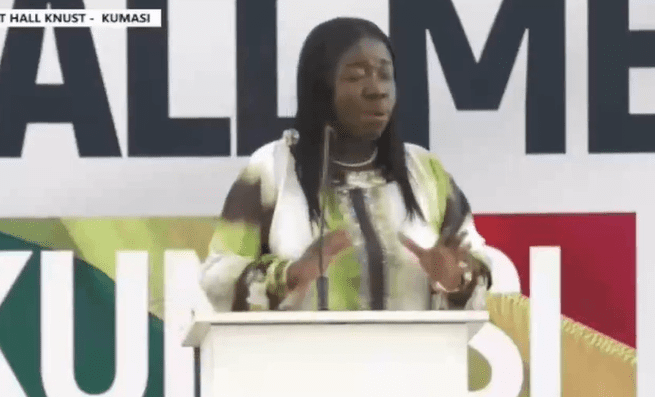 Member of Parliament for the the Techiman North constituency, Elizabeth Ofosu Agyare has explained why the Minority Caucus finds it difficult to offer suggestions to government.

Speaking at a town hall meeting in Kumasi on Monday, the MP stated that as of now, President Akufo-Addo has done poorly in the overall management of the economy.

According to her, the President does not have the required competence to implement sound policies like former President John Dramani Mahama, thus the Minority Caucus finds it unappealing tabling suggestions to government.

“We can make suggestions to President Akufo-Addo. Whether he works with it or not is another story. But even if he takes them, it will not be like doing it ourselves. Our elders say that crying on your own is different from somebody beating you to the point of tears. So even if we table suggestions to Akufo-Addo about how to handle the economy, he will not be able to implement our suggestions like former President John Dramani Mahama”, the MP stated.

Addressing a gathering of party folks at the Great Hall of the Kwame Nkrumah University of Science and Technology (KNUST), Madam Ofosu Agyare also indicated that she is disappointed in the state of the economy under the current regime.

In her view, despite the fact that government’s debt profile has increased as a result of incessant borrowing, there is still nothing to show for it.

The North Techiman MP therefore stated that the Minority Caucus will not back the E-levy Bill since government has not done anything meaningful from the numerous taxes it has collected so far; adding that the Bill will only hurt the survival of businesses in the country.

“We’re 137 NDC MPs in the Minority. Anytime there will be discussion on the E-levy Bill, which will require us to vote in support of the bill that will affect Ghanaians livelihood, families and businesses, we the NDC MPs will vigorously resist it. We the NDC MPs respect ourselves. We don’t chase after money. We know that the task ahead of us is bigger than any sum any organisation or individual could give to us.

“The progress and development of the country is our concern. However, the E-levy Bill requires a simple majority to become a law. Now the NPP has 138 MPs in Parliament. Which means if they all assemble to vote in favour of the Bill, it will be passed. If that happens, we the NDC MPs will like to state that, we would not be party to the Bill.

“Any inconveniences that will be posed by the levy must be attributed to the New Patriotic Party. We will not be a party to the e-levy. It’s a tax that has no justification and significance”, she stated.

Meanwhile ahead of voting on the Bill on January 25, the Majority Caucus have indicated that they will ensure that the Bill is passed by the House.