We cannot tell if inflation has peaked – Government Statistician 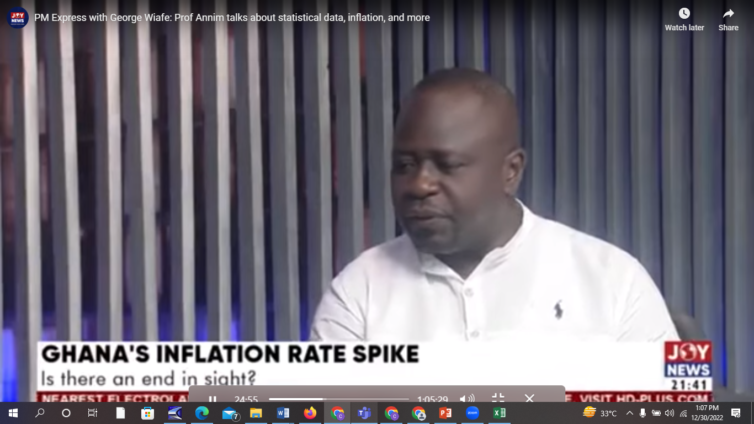 Government Statistician, Professor Samuel Kobina Annim, says he cannot tell whether inflation has peaked or not.

Speaking on PM Express Business Edition, he said, it is only the historical data that can tell whether inflation has reached its highest limit.

“It’s a conversation everyone wants to have, whether we’ve peaked or not. Anytime we do the release, we get journalists asking these questions.  Again, it’s not in my place to say yes or no. Just for three or four reasons anytime you want to talk about we’ve peaked, you need to ask yourself what does the historical data suggest?”

“We do it for internal purposes with a lot of caution based on what I said to you earlier, having seen a 9.9% jump [November inflation to 50.3%], I’ll be hesitant in saying that we’ve exhausted all the pass-through effects. This is exactly what I am saying”, he explained.

Continuing, Professor Annim also said despite the cedi gaining some grounds to the dollar in the month of December 2022, it does not mean inflation will come down in the month under review.

Improved cedi value does not translate into immediate fall in inflation

“I’ve heard people talking about why inflation is still going up when the exchange rate has slowed down. This is exactly what I tried explaining to you. If the cedi appreciates as we saw, it doesn’t automatically translate into the sellers bringing down the prices. It takes time for that to happen and that is what we mean by the pass-through effect and the other dimension is the multiple pass-throughs”.

Again, he said, “it takes time, and the other one is if the exchange rate drops, which commodities are affected and what are the weights of these commodities? When you have more than one item having an effect on the exchange rate, it gets complicated because you cannot exhaust the pass through effect from only the ‘spare parts’ point of view. If diesel [price] drops, you don’t expect only ‘trotro’ fares to automatically go down”.

This was as a result of a significant increase in transport fares, utility tariffs and the exchange rate fluctuation.

DISCLAIMER: The Views, Comments, Opinions, Contributions and Statements made by Readers and Contributors on this platform do not necessarily represent the views or policy of Multimedia Group Limited.
Tags:
historical data
Inflation
peaked
Professor Samuel Kobina Annim