We can't continue to blame the devil for these unacceptable accidents - Nortsu-Kotoe on death of UEW students - MyJoyOnline.com 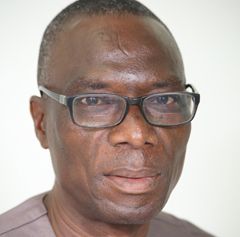 Ranking Member on Parliament’s Education Committee, Peter Nortsu-Kotoe, has commiserated with the families of the nine University of Education, Winneba (UEW) students who perished in a road accident over the weekend.

Saddened by the accident, he noted that “this heartbreaking and unfortunate incident has robbed us again of young lives who would have been very significant to our development as a nation.”

The unfortunate incident involved a Hyundai Universe commercial bus and a stationery articulated 40-footer truck at Asuboi, a suburb of Suhum on the Accra-Kumasi highway.

It is alleged that the accident occurred because the driver of the bus was asleep. Several others sustained injuries.

In a statement issued by the Minority, the Akatsi North MP charged the relevant stakeholders; the National Road Safety Commission (NSRC) and the Motor Transport and Traffic Directorate (MTTD) of the Ghana Police Service to take further steps to clamp down on such individuals whose actions continue to threaten lives on the roads.

He stressed that immediate initiatives must be taken because “the statistics on road carnage on our roads this weekend alone is horrendous and adds up to the already alarming cases of death on the road”.

The Minority noted that most of the carnages can be attributed to “recklessness, indiscipline and human error on the part of drivers and motorists.”

They, therefore, advised that “we cannot continue to blame the devil for these unacceptable happenings.”

Reacting to the incident, former President John Dramani Mahama advised drivers of intercity coaches and other public transport vehicles to exercise a little more caution with the lives of citizens entrusted to their care.

Meanwhile, the Student Representative Council (SRC) of the University of Education, Winneba has confirmed that five of the deceased are students of the school.

The Council in a statement revealed that the Hyundai Universe commercial bus had 35 registered UEW students on board together with other passengers.

Twenty-two of the students who sustained various degrees of injuries were first treated at Suhum Government Hospital and later transferred to the University Hospital for further treatment, according to the Council.

However, three of the students are yet to be accounted for.

It has been disclosed by the Public Relations Officer of the University of Education, Winneba, Ernest Azutiga, that the students who were involved in the accident were not on an official trip.