We conceded a cheap goal against Great Olympics – Gladson Awako 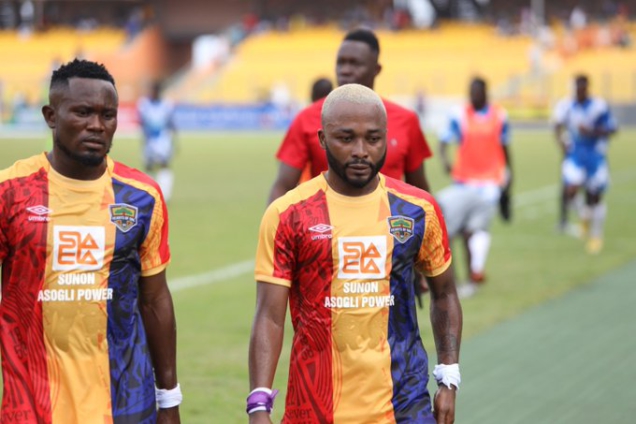 Hearts of Oak midfielder, Gladson Awako, has slammed the goal his side conceded against Great Olympics in the Mantse derby on Sunday.

Both teams squared off at the Accra Sports Stadium on match day two of the 2022/23 betPawa Premier League with Konadu Yiadom scoring a debut goal to earn a point for Hearts.

For the game’s opener, Abdul Razak Yussif took advantage of a defensive error from the Hearts backline to score, a goal Awako believes was ‘cheap’ to give away.

“We gave out a cheap goal which didn’t help our confidence and that helped our opponents to come in and feel they can also play. This is something I think didn’t go well for us,” he said during the post-match conference.

The former Olympics midfielder added that though they are not content with the result, they will work on their game and try harder for the remainder of the season.

“We are disappointed with the results. We were better, we looked good throughout the 90 minutes but as I said mistakes do happen that didn’t help us. We we will pick up the wrongs and go again,” he noted.

“It’s a tough game and we will pass through. It’s not easy we just started and I know staff are doing everything possible for us to know each other.”

DISCLAIMER: The Views, Comments, Opinions, Contributions and Statements made by Readers and Contributors on this platform do not necessarily represent the views or policy of Multimedia Group Limited.
Tags:
Gladson Awako
Great Olympics
Hearts of Oak