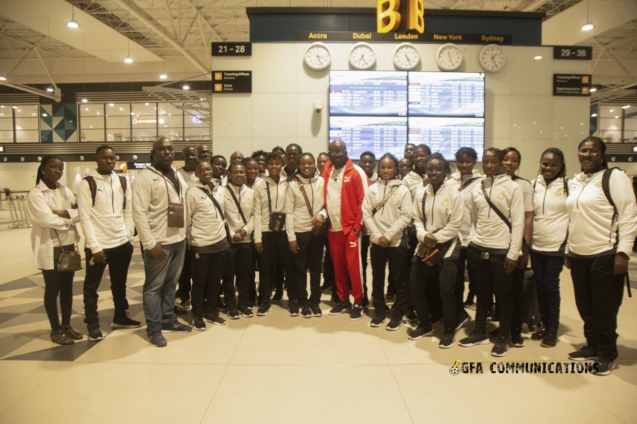 The president of the Ghana Football Association, Kurt Okraku, bid farewell to the Black Princesses ahead of their pre-tournament camping in France.

Head coach, Ben Fokuo, and his squad left Accra on Wednesday morning for a match against the France National U-20 team on Friday, July 29 as part of their preparations for the FIFA U-20 Women’s World Cup in Costa Rica.

On August 11, the Black Princesses will play the USA in their opening encounter at the Estadio Alejandro Morera, followed by matches against the Netherlands and Japan.

“It’s been many weeks of hard work, waiting and you all dreaming of playing at the highest level of football in your category. Now the waiting is over, it’s time to be very focused for the last leg,” Kurt Okraku said ahead of the team’s departure.

“As you leave Ghana to France to continue the long journey to Costa Rica. I am sure it is a journey each of you have been waiting for.

“From your individual clubs, you were picked to represent the country and now is the moment. We have been on this journey before but we always exit at the group stage. But I believe we have a group of talented players who have the capacity to go and make history.”

DISCLAIMER: The Views, Comments, Opinions, Contributions and Statements made by Readers and Contributors on this platform do not necessarily represent the views or policy of Multimedia Group Limited.
Tags:
Black Princesses
Costa Rica 2022
France
Kurt Okraku