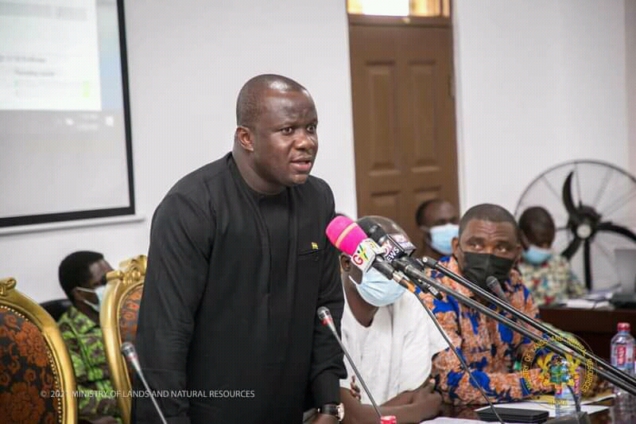 Lands and Natural Resources Minister, Samuel Abdulai Jinapor has called on traditional leaders to support the government’s quest to manage the exploitation of the country’s natural resources.

Speaking at a meeting with the National House of Chiefs on Thursday, May 20, the Minister noted that the involvement of the Chiefs will be needed for effective and efficient management of Ghana’s lands and natural resources.

“Any policy maker who put together a policy and does not factor the Chiefs in the management of lands and natural resources will fail. The lands were vested in the chiefs before our colonial masters came into our country.

“According to the constitutional architecture we have, in terms of the management of natural resources, the chiefs play an important role,” he said.

The Minister of Chieftaincy and Religious Affairs, Ebenezer Kojo Kum raised concerns about the numerous chieftaincy disputes and conflicts across the country.

According to him, with the support of Nananom, most Chieftaincy disputes will be resolved during his tenure as Minister.

“I know and i am very confident that, looking at the enthusiasm of Nananom, we can curb the galamsey menace that has been a canker in our country” he said.

On his part, President of the National House of Chiefs, Ogyeahohoo Yaw Gyebi in his speech pledged the support of Nananom in helping government to succeed in the fight against illegal mining in the various communities of Ghana.

He also urged the members of the National House of Chiefs to support the fight against galamsey which is destroying the beautiful environment Ghana has been blessed with.

“The vision of President Nana Addo Dankwa Akufo-Addo is to sanitize the mining sector and to ensure responsible mining through the use of small and large scale mining activities. This needs our support so Nananom are required to support His Excellency the President to succeed” he said.