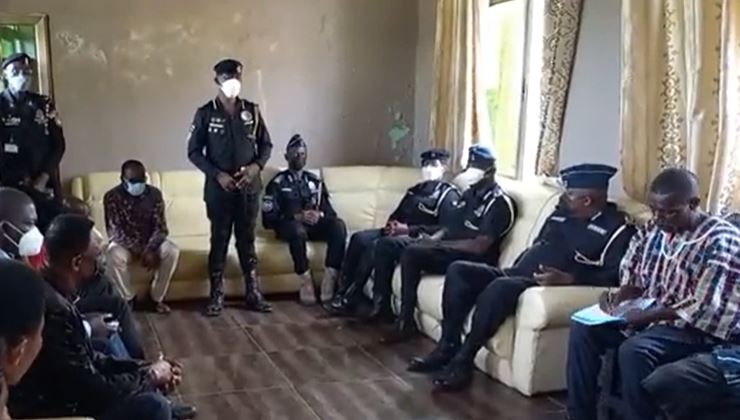 The Inspector-General of Police (IGP), Dr George Akuffo Dampare, has assured of his outfit’s commitment to probe into the actions leading to the destruction of the Essiama Divisional District Police Headquarters.

According to Dr Akuffo Dampare, the perpetrators will be brought to book.

The IGP gave the assurance when he led some members of the Police Management Board and Western Regional Police Command to visit Essiama and Nkroful in the Ellembele District of the Western Region.

“We have come barely 12 hours after the incident, just because of the difficulties of getting here earlier. Either than that, we would have come at the time that the incident was happening and walk with you to deal with it…

”..we will use every means within the law, slow but sure to pick every person who has been involved in this and deal with the person in accordance with the law in a manner that the person would regret being part of such an act for it to send the strongest message to the rest of the people in the community“, he said.

On Friday, April 1, some individuals besieged the Essiama Police Station and damaged properties belonging to the police.

Accra-based CitiNews reports that items damaged include louver blades, windows, and windscreens of some two parked buses and a pick-up, among others.

The irate youth also attacked some state institutions, according to the Police.

The group’s action is said to have stemmed from the death of a resident who was shot when security personnel at Nkroful attempted to disperse an agitated crowd who massed up in front of the Nkroful District Court after some 28 illegal small scale miners were brought to the court.

Andrew Donkor is reported to have died at the Ekwe Hospital.

In his speech, the IGP thanked residents of the Ellembele District for their timely intervention to prevent further destruction to the Police Station.

“You did your best to de-escalate the situation, and we are seeing a minimum disruption and fatality because of what you did. So we are here to commend and appreciate you.”

The Police also patrolled the principal streets of Essiama and interacted with community members.