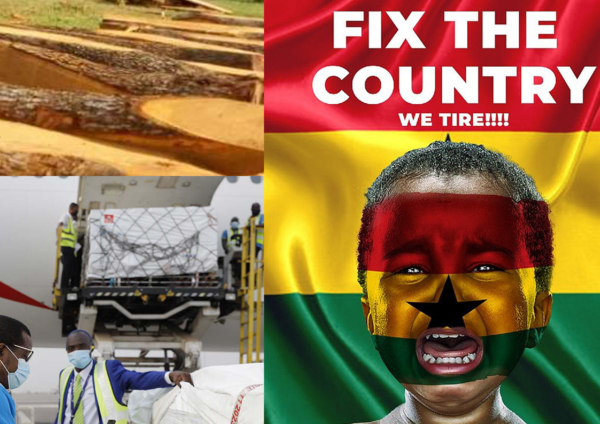 The week ended on a good note as Ghana received 350,000 doses of Astra-Zeneca vaccines on Friday. This set the stage for the second round of vaccinations across the country.

The chief director at the health minister stated that “we are still hoping that very soon we will be able to get more, especially for those who are going to do the second vaccination.”

Fix the country! A hastag drawing attention to the harsh living conditions of some Ghanaians was in the trends the entire week.

Some callers on the Super Morning Show said, “we thought we were electing leaders to better our lives but our lives are always going down, in fact, it is difficult, they should do something about it.”

Others noted that the cost of living keeps increasing yet salaries of workers keep depleting. Social media was awashed with stories of how many were coping and struggling to survive.

A massive demonstration was scheduled to further drum home these concerns, but on Wednesday, the Police secured an injunction to stop the action. This, however, did not deter the organizers who said “we know of no law that prohibits us from doing so.”

A Joy Forum highlighting the illegal logging and sale of rosewood revealed among others that the continues practice of the menace would result in serious environmental consequences for the country and its forest reserves.

Traders at the Tamale Timber market are unhappy about plans to sell the market to a private developer. They say they toiled to put the place which was so deplorable then in good shape and cautioned any developer intending to purchase the place to deist form doing so.

After touring some forest reserves and water bodies officials from the Lands Ministry expressed excitement that the illegal miners were gradually abandoning the practice and evacuating their equipment.

After winning the Greater Accra Regional Championship of the National Science And Math quiz, Presecans in Legon  are asking Ghanaians to watch out for what they call the ‘7th seal’ – an indication they intend to win the national competition this year after, lifting the trophy last year for the 6th time.

DISCLAIMER: The Views, Comments, Opinions, Contributions and Statements made by Readers and Contributors on this platform do not necessarily represent the views or policy of Multimedia Group Limited.
Tags:
#FIxTheCountry
Illegal Rosewood Trade
NSMQ
Weekly wrap