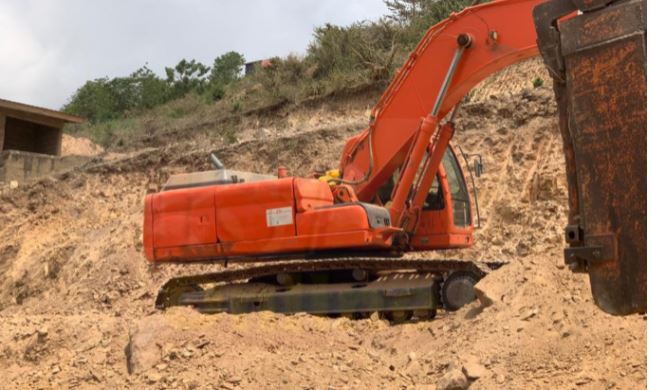 A joint Police and Military taskforce led by the Sanitation and Water Resources Minister, Cecilia Abena Dapaah, has uncovered how illegal sand winners have intruded a heavily guarded buffer zone of the Weija Water Treatment Plant.

This follows several reports of how the activities of these persons are destroying water bodies, nearly pushing the supply of potable water in the country to a crisis level.

The deployment of Military officers to the site on Monday, February 21 could not stop the sand miners from carrying out their activities.

Madam Cecilia Dapaah described their activities as illegal and urged them to immediately end their operations in the area.

“It adds up to the turbidity which we don’t want to be high and this is illegal mining of sand and stones. This is what I’ve seen and I am sure you are equally shocked at the way they are carting off the sand and stones from this place,” she said.

The team seized an excavator which was caught on site filling up articulated trucks.

But the owner of the machine, an estate developer, who identified himself as Aikins, claimed he had the clearance of chiefs and local authorities in the area.

“I went to the Assembly and the Assemblyman gave me a letter noticing the Water Works. The signature was quoted through the Assembly. Even though it wasn’t the MCE’s signature, he was in the know.”

“That is why he authorised the Assemblyman to write the letter. I have the backing of the chiefs; so, it is only reasonable that I construct the road. I sell a trip for GHC180 and share the proceeds with the chiefs,” he alleged.

His claims were strongly resisted by officials of the Ghana Water Company Limited (GWCL).

Managing Director of the GWCL, Dr. Clifford Braimah, said local authorities had no legal backing to construct roads; hence, the contractor cannot be allowed to continue work on the site.

“The law doesn’t give them the power [to continue the construction of that road]. I am not targeting him but he [Aikins] should stop bringing such information,” he noted.