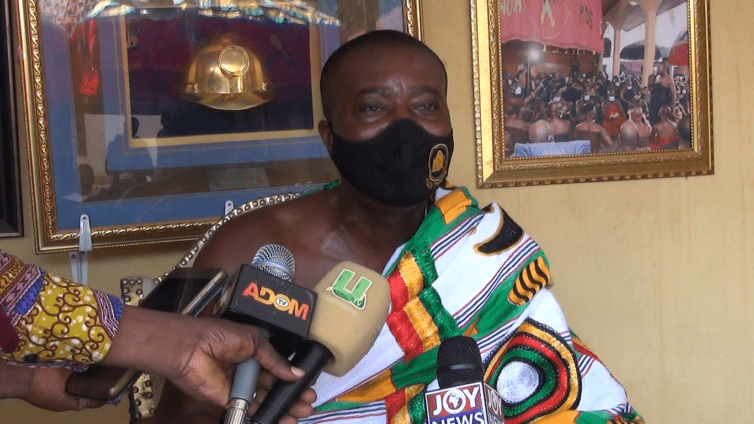 The resistance and objection from the traditional leaders against the issue of the LGBTQ+ activities keep gathering momentum in the Bono and Ahafo regions.

The latest to join the fray is the chief of Terchire, Nana Okoh Agyemang Boakye II, in the Tano North District of the Ahafo Region.

He has warned natives and residents that the necessary traditional rites would be performed to banish anyone caught in the LGBTQ+ act in the community.

He said the community joins other Ghanaians who have given their blessings for parliament to pass the Promotion of proper Human sexual Rights and Ghanaian family values bill, 2021.

Nana Okoh Agyemang Boakye II spoke during a courtesy call on him by the Catholic Bishop of Goaso, Most Reverend Peter Kwaku Atuahene, at his palace.

“Even if Parliament would have to vote to decide on the fate of the bill, we plead for it to be done transparently. This would enable us to know the voting pattern of our representatives in Parliament -whether they support good or evil, and to help us know the kind of persons we voted for”, the chief said.

The advent of colonialism, he explained, has contributed to the clamor for the rights of LGBTQ+ to be respected, a situation he said was nonexistent when chiefs were the sole leaders of the communities.

The chief of Terchire urged other traditional leaders to ensure such evil and alien acts do not prevail in the communities even if parliament accepts the rights of the LGBTQ+ members.

“In my traditional area – Terchire, I won’t permit that act. If you intend to marry or have any sexual activity with the same sex, it won’t happen here. Whatever rites that must be performed to banish such people and their families out of this town, will be done”, he warned.

“Terchire will not entertain any such act or person”, he stressed and further called on the Catholic Bishop of Goaso to propagate their position on the rights of gays and lesbians wherever he goes.

Already, the chiefs of Dormaa, Drobo, Suma, among others, have publicly declared their opposition to the rights of LGBTQ+.

The chief also appealed to the Bishop to lobby for development projects for the community, especially in the areas of education and health.

On his part, Most Reverend Peter Kwaku Atuahene reiterated the Catholic Bishops Conference opinions and positions on the Anti LGBTQ+ Bill and noted that though the desire of the community seems to be getting out of hand, requiring God’s intervention even as they also continue on their campaign against it.

He, however, appealed to the chiefs to continue to support them even as they continue to pray for God’s guidance and direction for the leaders to vote based on what the majority of Ghanaians want for the peace of the country.

The Catholic Bishop, who was given a stool as a symbol of friendship, also promised to lead the Church to work together for the development and continuous coexistence of the members and the community.