Wenger: Arsenal ‘must be perfect’ to win title 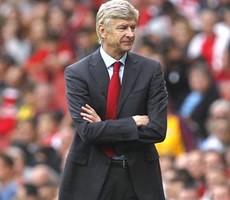 Arsene Wenger believes Arsenal will have to be perfect and rely on Chelsea slipping up if they are to win the Premier League title this season.

The Gunners dealt what could prove to be a potentially fatal blow to the Reds' hopes of securing a return to the Champions League after a comprehensive victory at the Emirates Stadium left Brendan Rodgers' side now some seven points adrift.

Arsenal moved back above Manchester City, who slip to fourth ahead of Monday night's game at Crystal Palace, but remain some seven behind Chelsea after the Blues beat Stoke in Saturday's late kick-off at Stamford Bridge. Arsenal host Chelsea on April 26, but Wenger concedes even if they were to win that contest, overhauling such a points deficit would be a big ask.

"For the title we need us to be perfect and Chelsea not to be perfect, so let's focus on what we can master which means our own performance," he said.

Arsenal run amok against Liverpool to move up to second Wenger's men are, though, the side in form, having lost just twice in their last 12 matches in all competitions – a run which has propelled Arsenal not only up the table, but also into the FA Cup semi-finals at Wembley.

"If there was 15 (league) games to go, you would not complain," he said. "We had a very slow start this season, when we had many important players out together, and we dropped too many points.

"We played six games in the Premier League and won two, after that you have a mountain to climb. "But now you can see that when we have everybody back, we can compete and the number of points we have made shows we have the quality to fight at the top."

Arsenal striker Olivier Giroud netted a fourth in stoppage time, curling the ball in from 20 yards to notch his seventh goal in as many appearances. Arsenal give Raheem Sterling tantalising glimpse of alternative future.