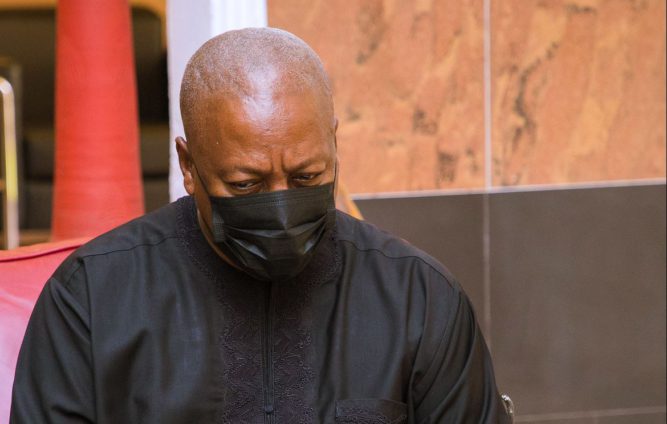 Former President John Mahama has commiserated with the families of nine students who lost their lives in an accident on Sunday.

Wishing those injured a speedy recovery, Mr Mahama bemoaned the death of the University of Education, Winneba students who died while travelling at Asuboi.

Commenting on the unfortunate loss, the former President said, “What a sad waste of young lives in the Asuboi accident!!”

In a Facebook post, he said the fatal accident could have been avoided if due diligence was exercised.

Mr John Mahama, therefore, advised that “Drivers of intercity coaches and other public transport vehicles must exercise a little more caution with the lives of our citizens entrusted to their care.”

On Sunday, March 13, a Hyundai Universe commercial bus conveying some students of the University of Education, Winneba and other passengers was involved in an accident.

The accident occurred at Asuboi, a suburb of Suhum on the Accra-Kumasi highway.

The incident happened after the bus travelling from Sunyani to Accra crashed into a stationery articulated 40-footer truck.

Eight people were said to have died at the spot after the 40-footer truck loaded with wood fell onto the road.

Another life was lost when the many injured were transported to the Suhum Government Hospital for treatment. So far, nine casualties have been recorded.

The remains of the deceased have been deposited at the Suhum Government Hospital morgue.

DISCLAIMER: The Views, Comments, Opinions, Contributions and Statements made by Readers and Contributors on this platform do not necessarily represent the views or policy of Multimedia Group Limited.
Tags:
Asuboi
John Mahama
UEW