What is criminal about our billboards in public? - President of LGBTQ+ Ghana - MyJoyOnline.com

What is criminal about our billboards in public? – President of LGBTQ+ Ghana 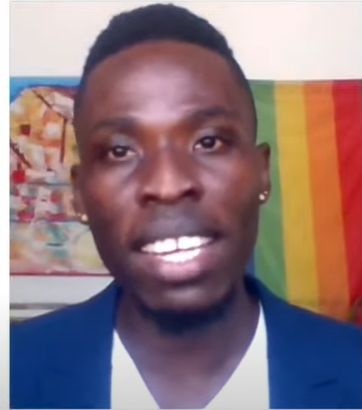 President of the LGBTQ+ Rights Ghana, Alex Kofi Donkor says he sees nothing wrong with the billboards erected by his group across the country.

According to him, the messages on the said billboards are not offensive, therefore he does not understand the calls for their removal.

Speaking in an interview with JoyNews on Thursday, June 9, he stated that his outfit has not breached any applicable law, therefore the advocacy for their removal should not be a priority.

“My question is what was the message on that billboard that is incriminating or that is criminal so much so that they’re calling on the Police to pull down the billboard?

And one would ask, a country that is so outraged over a billboard that speaks about love, tolerance, acceptance as compared to all the negative experiences that we are experiencing in this country is one that we really need to critically ask ourselves this hard questions: That where does our priorities lie?

Which part of [our] rights and responsibilities and even in our criminal code have we breached as a result of mounting that billboard?”, he worried.

Alex Donkor’s comments were in reaction to a call by sponsors of the Anti-LGBTQ+.

Sponsors of the Bill in Parliament have issued a 24-hour ultimatum to the Inspector General of Police, Dr. George Akufo Dampare to pull down billboards mounted across the city to promote the activities of homosexuals.

One of the billboards cited at the end of the Tema-Accra bound side of the motorway has the group’s rainbow colours with an inscription promoting their activities.

Speaking to the media at the scene of the billboards, Ningo-Prampram MP, Sam George described it as an affront to the country’s laws and issued a 24-hour ultimatum to the Police to pull it down.

“Over the weekend, our attention was drawn to an illegality that flies in the face of the Constitution of Ghana, Articles 11 and 26 of the 1992 Constitution which talks about Ghana’s cultural sovereignty. We realised that a billboard promoting the activities of the LGBTQ community have been mounted along the motorway.

We are by this calling on the Inspector General of Police, Dr. George Akufo Dampare to immediately, within the next 24 hours carry out the necessary security operations, that this billboard which is an affront to the 1992 Constitution, be pulled down in conjunction with the MCE for the area”, he said.

According to the Ningo-Prampram MP, if government fails to take action, sponsors of the Anti-Gay Bill “will take action as enjoined by our Constitution to defend the Constitution.”

Speaking to journalists at the scene where one of the billboards has been mounted on Thursday, Sam George also noted that their demand is to express displeasure and discomfort with the action by the LGBTQ community.

“As sponsors of the bill before Parliament and Members of Parliament who represent the wills and aspirations of the Ghanaian people, we have deemed it important to show up here and register strongly our displeasure, our discomfort and our abhorrence for this unholy, uncultural and untraditional advertisement on the iconic road, the N1 Tema motorway”, he stated.

The MP also called on the chairman of the Constitutional and Legal Affairs Committee, Kwame Anyimadu-Antwi to explain why he clandestinely held a meeting with advocates of homosexual rights without the consent and approval of the Ranking and his deputies.

“We have served notice that if the chairman of the Constitutional and Legal Affairs Committee, Honourable Kwame Anyimadu will continue to drag his feet, we will hold his foot to the flame of accountability on the job that he has been tasked to do by the plenary”, the Ningo-Prampram MP stated.

Meanwhile, the Convenor of the National Coalition of Proper Human Sexual Rights And Ghanaian Family Values Bill, Moses Foh-Amoaning has charged the Akufo-Addo administration to live to the dictates of the ‘Battle is the Lord’s’ mantra, which signifies utmost trust in the dictates of the Lord’s teachings.

“The NPP government won on the mantra of the ‘Battle is the Lord’s’ and the President puts out his faith in the Lord and that’s beautiful. But it is important that we enforce the matters that account to God’s will. So there is a higher spiritual obligation to Members of Parliament of the ruling government to ensure that the bill is passed”, he noted.

In a related development, the Minority in Parliament also threatened on Wednesday to block the introduction of any bill by the Executive if the Chairman of the Constitutional and Legal Affairs Committee, Kwame Anyimadu-Antwi continues to delay the passage of the Anti-LGBT Bill.

Mr. Muntaka Mubarak argued that the Chairman ought to have used due process for the passage of the Bill.

“I can assure that any other bill that will be introduced in the House, we shall resist it, even if it is to provide water, we will resist it”, said the Minority Chief Whip, Muntaka Mubarak.