Who has performed better in the Clasico – Ronaldo or Messi? 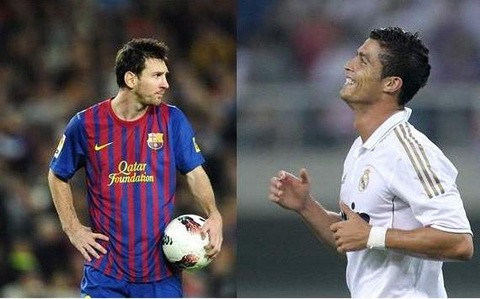 The Clasico is back. Real Madrid and Barcelona battle it out once again in the famous fixture on Sunday, this time with La Liga at stake and, as usual, their hopes rest respectively upon the shoulders of the world's two finest footballers: Cristiano Ronaldo and Lionel Messi.

Cristiano and Leo meet for the 21st time in a Clasico clash since the Portuguese moved to Madrid from Manchester United in 2009 for what promises to be another intriguing installment of the pair's compelling conflict. But which of the two has peformed better in their meetings over the past five seasons?

There was little joy for Ronaldo in his first campaign in Spain. The Portuguese returned from injury to face Barcelona at Camp Nou in La Liga, but Manuel Pellegrini's side lost out to a Zlatan Ibrahimovic volley in a tight encounter and Messi netted the opener in the Primera Division clash at the Santiago Bernabeu later in the season as Pep Guardiola's side won 2-0.

The teams' next meeting was much more memorable for Barcelona fans as the Catalans thrashed Mourinho's Madrid 5-0 at Camp Nou and although Messi didn't score in that match, the Argentine did set up two goals for David Villa in the famous victory.

Both Messi and Ronaldo were then on target from the penalty spot in the sides' 1-1 draw in La Liga at the Bernabeu in April of 2011, before the Portuguese headed home four days later in extra-time to win the Copa del Rey for Madrid at Mestalla. Leo, however, responded in some style the following week with two stunning strikes to down Mourinho's men in the Champions League semi-final first-leg in Madrid.

In the Spanish Supercopa series at the beginning of the following season, Messi (just back from his holidays) hit three goals and set up the other two as Barca edged out Madrid 5-4 on aggregate, leaving team-mate David Villa in awe. "In the future, when I look at photos of Messi in which I am next to him, I will be able to say: 'I played with Leo Messi'," he beamed. Ronaldo also scored his first at Camp Nou in the return leg, starting off a prolific run in the Catalan capital.

For now, however, Barca had the upper hand and Messi served up an astonishing assist for Alexis Sanchez as the Blaugrana won 3-1 at the Bernabeu in La Liga in December. And although Cristiano gave Madrid the lead in the next Clasico (in the Copa del Rey in January 2012), Messi's assist for Eric Abidal won the day for Guardiola's side.

In the return leg, however, the tide began to turn somewhat. The two teams played out an entertaining 2-2 draw, with Messi setting up Pedro for one of the Barca goals and Ronaldo on target again as Madrid came back from two goals down to claim some pride in the Catalan capital.

The pair's next meeting, their 13th in the Clasico, was won by Madrid – and by Ronaldo: the Portuguese latched onto a Mesut Ozil pass and netted the winner in a 2-1 victory for Mourinho's men which proved crucial on their path to winning La Liga with a record 100 points.

Both players were on target (Messi once with a penalty) in each leg as Madrid beat Barca on away goals in the sides' Spanish Supercopa series in 2012-13. The second of those, a 2-1 victory for Real, was the first of five winless games for the Catalans in the fixture.

Leo and Cristiano both grabbed the headlines in the Camp Nou clash in October, however, with two goals apiece in a thrilling 2-2 draw. "I think it should be forbidden to talk about who is the best player in the world," Mourinho said afterwards. "Because these two are from another planet."

Messi assisted Cesc Fabregas in the 1-1 Copa clash at the Bernabeu after that, but Ronaldo had the last laugh with a double in the 3-1 second-leg win at Camp Nou, which included a penalty which he won and converted past Jose Pinto early in the game. "For me, Cristiano is the best player in the world," team-mate Sergio Ramos said afterwards. "And he always shows up for these type of games."

Leo was then on target for Barca as the Catalans lost out 2-1 in Madrid, with Ronaldo coming off the bench to hit the woodwork and shake up his side in the second half as Ramos won it with a late header. Barca, however, went on to win La Liga by matching Madrid's 100-point mark from the previous season.

And the Catalans returned to winning ways in the Clasico earlier this season with a 2-1 win in what was a quiet game for Messi, somewhat subdued out on the right. Ronaldo, meanwhile, grabbed an assist by setting up youngster Jese for a late consolation.

Overall, the two have each proved decisive: Ronaldo has settled a Copa del Rey final, a cup semi, a crucial clash in La Liga and helped Madrid claim a Spanish Supercopa; Messi has decided a Champions League last-four meeting and a cup quarter-final, while winning a Supercopa series virtually on his own and contributing to a couple of momentous victories in the Primera Division, including the 5-0 success.

"Nobody is more complete than Messi," Guardiola said after that game, when asked about Leo's supporting role. "Leo is the best at everything."

Indeed, though Ronaldo's ratio of goals-per-minute in the fixture over the last five years is slightly superior to Messi's, the fact that the Portuguese has just one assist in the match-up to the Argentine's eight in that time tells the story of the Barca's man overall dominance so far. While both men have hit 12 goals in the Clasico since 2009, Leo has been involved in 20 strikes (one-per-game) to Cristiano's 13 during that period.

Whatever happens on Sunday, this tale is set for many more chapters yet and further twists and turns as these two fantastic footballers continue to etch their names into Clasico folklore, but at the moment, the story's principal protagonist since 2009 is not Cristiano Ronaldo, but Lionel Messi.