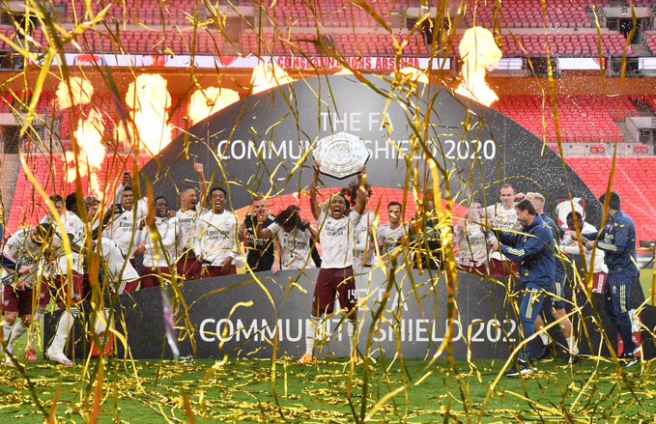 The 2020-21 season is two weeks away as teams round up preparations for the new season.

This time, it’s with regard to which team finishes in the top four. Believe it or not, winning the FA Community Shield has had a glorified influence on the top 4 chances of the side.

Since 2000, only three teams have failed to make the top four after winning the season’s curtain raiser, with United appearing twice. Chelsea and Arsenal are the other two clubs.

Chelsea in 2000 beat Manchester United 2-0 in the Community Shield final and finished sixth the following season. Manchester United defeated Wigan Athletic 2-0 in 2013 only to finish seventh the next season. In 2016, the Red Devils once again won the trophy after beating Leicester City 2-1 and ended up sixth the subsequent season. 2017 saw Arsenal defeat rivals Chelsea on penalties before finishing sixth that season.

Well, those were the four moments a team failed to finish in the top four after winning the Community Shield trophy. However, that number becomes thin in the bigger scheme of things, because the remaining 16 winners made the top four the following season.

That adds up to an 80% chance of finishing in the top four next season for Mikel Arteta’s men. If history in the last 20 years is anything to go by, whatever be the case, Arsenal will finish higher than last season since no winner has finished below seventh.

It’s also worth to note that no side had managed to win the Premier League after lifting the Community Shield trophy since 2010-11 before Pep Guardiola’s City broke that curse two years ago.

It’s possible Arsenal could break this positive omen themselves, but there is new energy at the Emirates under Arteta and Arsenal will be certainly looking to make the dream of finishing in the top top four a reality next season.

DISCLAIMER: The Views, Comments, Opinions, Contributions and Statements made by Readers and Contributors on this platform do not necessarily represent the views or policy of Multimedia Group Limited.
Tags:
Arsenal
Community Shield
Mikel Arteta