Why brukutu and pito are superior local beers 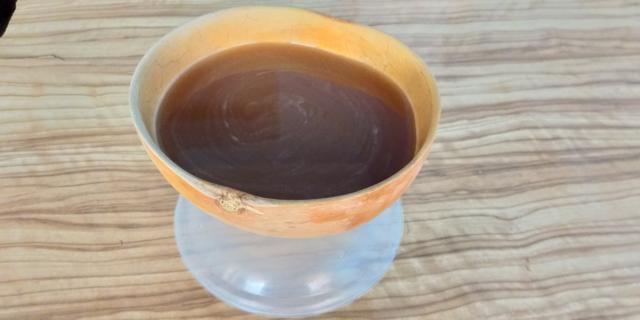 Burukutu and Pito are more than drinks. Burukutu and Pito which are brewed from either Sorghum or millet, guinea corn, or maize are indeed a way of life. Sometimes some brewers combine thefermented millet or sorghum in one drink.

The grains are soaked, dried, and then milled and combined with water. The mix is then boiled and left to ferment. Before serving, pito needs to be strained. The resulting drink is subtly sweet and slightly sour, ranging from amber to dark brown. Pito and Burukutu are traditionally served in a calabash (gourd), but it is also often drunk from regular cups.

They are regarded as twin drinks.  Both drinks are highly strong given the fermentation processes in their production. While Pito is usually filtered off from the top, Burukutu is usually the part that settles down and which contains remains that some writers believe can cause cancer. Pito is believed to be purer and sweeter than Burukutu since it is not allowed to settle down. Some held the view that Pito tastes like Heineken beer, others say, Pito tastes feminine, while Burukutu is masculine.

Hence, drinking brukutu or Pito,therefore helps you to meet your probiotic needs and is the term “for life.” Probiotics are microorganisms proven to exert health-promoting influences in humans and animals. The reason why fermented Asaana is beneficial is because of the natural probiotics they contain.

One study by Parvez et al.(2006) found that probiotics help in  “(i) improving intestinal tract health; (ii) enhancing the immune system, synthesizing and enhancing the bioavailability of nutrients; (iii) reducing symptoms of lactose intolerance, decreasing the prevalence of allergy in susceptible individuals; and (iv) reducing the risk of certain cancers.”

Three other studies (Ritchie and  Romanuk, 2012; King et al. 2014;  Sonestedt et al. 2011) found that Probiotics have been shown to improve immune function as well as digestive and heart health.  Also, a recent study by Obafemi et al.(2022) affirmed that in several African countries, traditional fermentation processes provide a means of food preservation, improving the shelf life and adding to the nutrients in the food products.

Another bonus is that drinking Brukutu and Pito enhances digestion. One study by Ritchie and  Romanuk, (2012) found that during fermentation, the probiotics produced may aid in restoring the balance of friendly bacteria in the gut and deal with some digestive problems.

In the case of millet and sorghum, science has also demonstrated the numerous benefit we get from them.  For instance, controls blood sugar levels Devi et al. 2016; Kam et al.2016), due to its low glycemic index  (Dias-Martins et al. 2018; Narayanan et al. 2016).

Lowers cholesterol,  Devi et al.(2016) study found that millet is loaded with soluble fiber,  and this in turn produces a sticky material in the gut.  This helps bind fats and lowered cholesterol levels. This was confirmed in one rat study by Lee et al.(2010) which states that rats fed foxtail and proso millet triglyceride levels decreased drastically juxtaposed with the control group.

In the case of sorghum, it has high fiber content.  It is also an antioxidant as espoused by Dykes, L(2019), and fights oxidative stress and inflammation, Hussain et al.(2016).

One study by Baaij et al.(2015) found that sorghum is loaded with magnesium,  a mineral that’s significant for bone formation, heart health, and over 600 biochemical reactions in the body, such as energy production and protein metabolism.

Awika and Rooney (2004) found that eating Sorghum may reduce the risk of certain types of cancer in humans, mostly colorectal cancer, compared to other cereals. This is due to the high concentration of anti-inflammatory phytochemical antioxidants, including phenolic acids and flavonoids, found in this grain.

Holzapfel. W(2002) also found that pito contains essential minerals such as zinc (Zn), calcium (Ca), magnesium (Mg), and iron (Fe), which are responsible for body and tissue regulation. A previous study by the Food and Agriculture Organization of the United Nations (1995) also found that pito or Brukutu beer in Africa has also been found to contain remarkably high levels of riboflavin and nicotinic acid, which are vital for people consuming a high-maize diet.

Avicor et al.( 2015) also found that  Pito has an alcoholic content of 2–3% and pH range of 3.5–5 (5).  In the case of Brukutu for instance, one old study(Odetokun SM. 1997) found that during the fermentation of cereal products for preparing burukutu, the crude protein increased from 3.2 g/100 ml to 7.8 g/100 ml while there was a gradual decrease in the sugar and ascorbic acid content from 40.7 g/100 ml and 83 mg/100 ml to 3.9 g/100 ml and 2.4 mg/100 ml respectively. The predominant sugars are fructose, glucose, maltose and sucrose. Burukutu contains almost all essential amino acids in the required proportions except cystine and tryptophan which have been destroyed by heat during boiling.

Ajiboye et al. (2014) study found thatdrinking too much can significantly reduce ferric ions, which could lead to reduced blood levels.

While Pito is usually filtered off from the top, Burukutu is usually the part that settles down and which contains dregs that can cause cancer. Pito is believed to be purer and sweeter than Burukutu since it is not allowed to settle down. Burukutu also depletes antioxidant enzymes(Ajiboye et al. 2014).

Indeed, studies affirmed that our local drinks such as Pito and Brukutu have numerous health benefits if drunk in moderation. We can therefore rebrand these drinks to generate foreign exchange

DISCLAIMER: The Views, Comments, Opinions, Contributions and Statements made by Readers and Contributors on this platform do not necessarily represent the views or policy of Multimedia Group Limited.
Tags:
Local beers
Pito