Why didn’t the Speaker go to collect the road tolls himself? – John Boadu quizzes 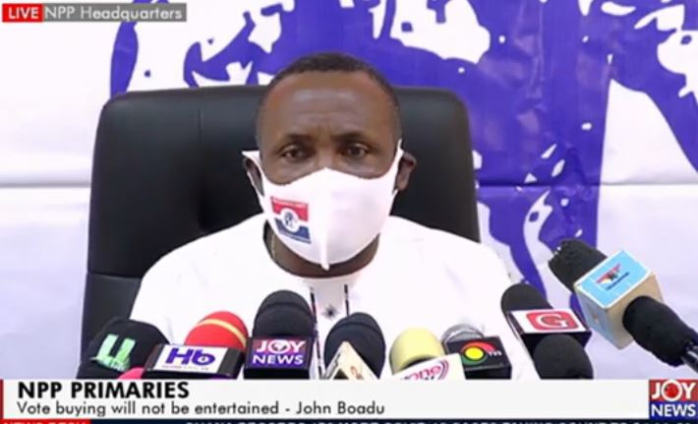 The General Secretary of the New Patriotic Party has questioned why the Speaker of Parliament did not assume the role of a road toll collection personnel after directing the Roads and Highways Minister to withdraw a statement announcing the cessation of collection of road tolls.

Speaking in the Central Region, John Boadu backed the Roads and Highways Minister, arguing that the decision was timely to avert possible chaotic situations at toll collection points in the country.

Although he admitted that the Speaker was right in asking the Minister to reverse his directive, John Boadu insisted that Kwasi Amoako- Attah did nothing wrong.

“Technically, the Speaker was right. If Parliament enacts a law, then only Parliament has the authority to repeal that law. But what the Road Minister did was also right, because the announcement of the scrapping of the payment of road tolls would have caused confusion at the toll collection centers. He only suspended the operationalisation of toll collection, not the law. If he had not done that, there would have been chaos at the toll booth. With all due respect, why did the Speaker himself not go to the various toll collection points to take tolls after issuing the directive to the Minister?,” he asked.

Meanwhile, the comment by the NPP stalwart has been condemned by the ranking member of Parliament’s Roads and Transport Committee.

Joining the debate on the 2022 budget on the floor of Parliament, Kwame Governs Agbodza described John Boadu’s comments as contemptuous.

He demanded an apology from him to the House and asked that he be hauled before Parliament for disrespecting the Speaker.

He contended that failure to take action against him will serve as a bad precedent and will encourage others to do the same.

Mr. Amoako-Attah’s directive came hours after the Finance Minister, Ken Ofori-Atta announced in Parliament that motorists who ply tolled roads across the country, will no longer be required to pay tolls immediately after the 2022 budget is approved.

This action by Mr. Amoako Attah was not taken lightly by the Speaker, Alban Bagbin.

The Speaker subsequently directed the Roads and Highways Minister to withdraw his statement announcing the cessation of the road tolls.

Almost a week after the Speaker’s order, Mr. Amoako-Attah is still in defiance of the directive.

According to Kwame Agbodza who is the MP for Adaklu Constituency, Ghana will lose about $10million by November if the collection of road tolls does not resume.

DISCLAIMER: The Views, Comments, Opinions, Contributions and Statements made by Readers and Contributors on this platform do not necessarily represent the views or policy of Multimedia Group Limited.
Tags:
John Boadu
New Patriotic Party
Road tolls