“Why do you play lefty?” Federer queries Nadal on Instagram Live 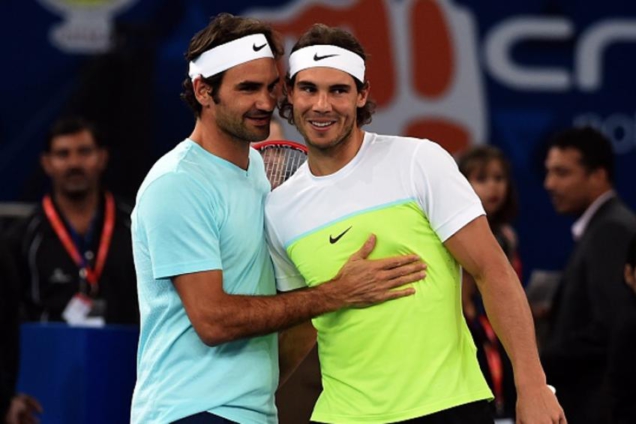 After some hilarious technical difficulties, the Spaniard’s first special guest, Roger Federer, finally appeared on the screen to the delight of tennis fans around the world.

Speaking candidly with each other, these great champions have been spilling the beans on seemingly every possible subject, from building the perfect tennis player, to traveling back in time to change one moment in their careers, to dealing with an adversarial crowd, to their current mental and physical health—along with a few GOAT comparisons.

On Monday morning, it was Rafael Nadal’s turn. In typical Rafa fashion, he was laser-focused on the task at hand, answering his fans in both Spanish and English. Nadal was so in the zone, like he often is on the tennis court, that he seemed to forget about a few legends hanging out in the comment section waiting for their turn to speak to the Spaniard, until a woman in the background, possibly Nadal’s wife Xisca Perello, whispered something in his ear.

“One moment guys I have Roger here and I think he wants to be in touch,” Nadal said. “As you know it’s my first Instagram Live so it’s not that easy for me.”

To which Andy Murray responded “This is brilliant, he can win 52 French Opens but not work Instagram.”

“Roger go out, come back, and request again,” Stan Wawrinka instructed in the comment section.

After about five minutes of troubleshooting, the magic moment finally happened.

After exchanging a few pleasantries, Federer got right to the point.

Federer: “One thing I wanted to ask you because it’s been bothering me, is that you’re a lefty. That’s been a problem for me. If you are a righty, why do you play lefty?”

Nadal: “I cannot play righty. That’s just a legend. I can write with the right hand. My basketball skills are with the right, but not in the tennis court or with football.”

With that myth dispelled, the two spoke about their current tennis training, or lack thereof.

Nadal: “I didn’t touch a racquet since Indian Wells.”

Federer: “Perfect! You won’t be able to play tennis anymore when you get back.”

Nadal: “I hope to remember something when I come back on tour. How are you doing?”

Federer: “I’ve been hitting a little bit against the wall. Rehab with the knee.”

Federer: “It’s OK. I had a really good first six weeks, then it was a bit slower. Now it’s getting better again, but I have plenty of time. There is no stress or rush. At the end of the day, I just want the knee to be good. It doesn’t matter when I return.

I think after the second surgery, it’s easier the second time around. But I don’t need to experience a third one.”

Nadal: “At least not during our tennis careers.”

While their conversation was brief, it was touching to see the joy and excitement with which Roger and Rafa spoke. Federer and Nadal make no bones about their love for each other. That shone through the screen for all the world to see.

After not-so-patiently waiting in the background, it was finally Murray’s turn. Among other things, their conversation was centered around the upcoming Mutua Madrid Open Virtual Pro, scheduled to take place from 27 to 30 April.

Murray: “I spoke to Feli Lopez. He messaged me today and said you’ve been practicing like 3-4 hours a day on the PlayStation.”

Nadal: “Yeah, I’m not doing anything else. (laughter) I just played my first match today.”

Nadal: “You hit to the backhand all the time?”

Murray: “We, me and you, were playing unbelievable. But after a set, your guy was unbelievably tired, his energy thing. I’ve never seen you get tired after one set before.”

Nadal: “We can play a match later.”

Murray: “I’d be up for that. I don’t have a character. I’m not in the game as myself, so I have to choose someone else to play with.”

Nadal: “That doesn’t matter. You can choose, maybe Nick, or something? I’m going to text you later to play a match.”

Murray: “Just not too late, because I have to get up with the kids in the morning.”

Nadal: “You have to be ready for the Spanish time.”

At one point, nearly 50,000 people around the world were simultaneously tuned in to the conversations.

DISCLAIMER: The Views, Comments, Opinions, Contributions and Statements made by Readers and Contributors on this platform do not necessarily represent the views or policy of Multimedia Group Limited.
Tags:
Andy Murray
Rafael Nadal
Roger Federer
Tennis