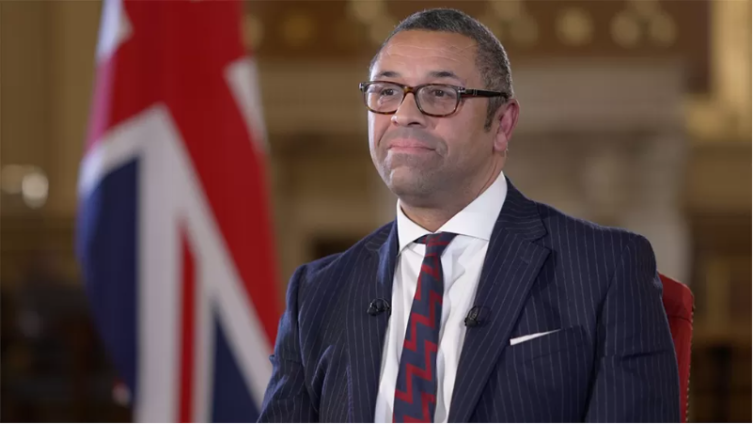 Picture the scene. I am standing at the top of the Grand Staircase of the Foreign, Commonwealth and Development Office. It is perhaps the most architecturally imposing part of the building, a riot of Victorian excess.

There are marble pillars, gilded panels and coffered ceilings. The walls are covered in poor quality murals telling the story of imperial success.

The images of crude propaganda were designed to impress visiting potentates. And in the corner of one painting sits an astonishing image – a small, naked black boy holding a bowl of fruit up to his supposed colonial betters.

The boy is there to represent Africa or rather – in the words of the now long-forgotten artist, Sigismund Goetze – “our obligations and possibilities in the dark continent”.

Next to me is Foreign Secretary James Cleverly, who is telling me how relaxed he is about the image, just down the corridor from his office.

Yes, that Mr Cleverly – Britain’s first half-African foreign secretary, who, a few hours earlier hosted the presidents of Sierra Leone, where his mother came from, and South Africa.

He told me that even one of his predecessors, Lord Curzon, thought the painting “outdated and jingoistic” when it was installed in 1921. And it does not, he said, reflect a modern Britain where he, the prime minister and home secretary are of African or Indian heritage.

“I walked past (the painting) with a head of state of an African nation three hours ago,” he said.

“Neither of us looked at it because we were too busy talking about the important stuff that we have got to talk about.

“You can be hidebound by stuff like this or recognise it is what it is: this was a reflection of what happened in the past. But what I do is focus on the future.

“If anyone had a right to feel maybe insulted or upset, I think it might be me, but it doesn’t worry me because we have got other fish to fry.”

And those fish involve Britain engaging more closely with medium-sized powers in Africa and elsewhere.

I have come to the Foreign Office to hear the germ of an idea that Mr Cleverly hopes will shape future British foreign policy.

The thought is that Britain has for too long focused on nurturing its traditional allies and keeping a wary eye on its traditional competitors, while at the same time many countries in-between have been neglected.

These are the African countries which might have failed to back the West’s defence of Ukraine in crucial United Nations votes. Countries which believe developed nations failed to support them sufficiently over Covid and climate change. Nations which perhaps look more to China and Russia for their investment and security.

“As well as engaging with the countries that are already very influential on the world stage, we need to look at the partnerships of the future,” Mr Cleverly told me.

He added the UK had to think about the African countries whose populations, economies and global influence are all growing.

Mr Cleverly will not name these countries or even give a generic description. Officials talk privately of “middle-ground countries” or “middle powers”, but accept that no phrase is quite right.

The idea, though, is about trying to find a new form of diplomatic and economic engagement based on mutual benefit, even if the detail – for now – has yet to be fully thought through.

He said: “What it means is having a degree of thoughtfulness and sophistication to our engagement, where we’re engaging on issues of the future. Some of those are things that we talked about already – climate change, energy transition, that kind of stuff, but also things like health collaboration.

“For example, one of the things we are discussing with the delegation from South Africa is pandemic preparedness. And that’s the kind of thing that is going to be increasingly important with countries in Africa.”

Mr Cleverly does not pitch it as crudely as an attempt to push back against Russia and China, both of which have a significant presence in Africa, whether in the form of Russian mercenaries from the Wagner Group or China’s vast investment in infrastructure. But the foreign secretary accepts there is an ideological battle.

“We recognise now there is a global competition of ideas,” he said. “So we really have got to have a willingness to sell our ideas and why the values that underpin our democracy are the values of our partners as well.”

Mr Cleverly said the UK must not be a country only looking to “harvest” ideas, talent and resources from African countries.

“We also have to be a valuable partner…. that is looking to invest back into our partner countries. It’s got to be a real partnership. I think that is an offer that we can put forward that some other countries are not putting forward.”

But, I ask, might not some African countries question the reliability of the UK and other Western liberal democracies? And will not some say the UK has not helped Africa much on Covid or climate change, and is instead despatching asylum seekers to Rwanda while cutting its foreign aid?

“We are still one of the largest aid donors in the world,” Mr Cleverly said. “Money is important. We absolutely recognise that and we look forward to the point where the UK economy has got back to the position where we go back up to 0.7% of GNI (gross national income) in terms of our overseas development assistance expenditure.

“But it’s about recognising… there are really important partners around the world who are not as wealthy, whose economies are not in the same place as ours. But nevertheless, they absolutely have something to offer to both the UK and to the globe.

“And so we need to have humility, we need to recognise that the only way that we’re going to be mutually successful is a mutually beneficial partnership.”

It is a pitch that Mr Cleverly hopes will shape the UK’s relations with Africa for decades to come.

DISCLAIMER: The Views, Comments, Opinions, Contributions and Statements made by Readers and Contributors on this platform do not necessarily represent the views or policy of Multimedia Group Limited.
Tags:
James Cleverly
UK-Africa relations