Why Singapore is so so clean

About 200 volunteers scoured the housing estate looking for rubbish in Khatib, a neighbourhood in northern Singapore. There were families with young children and volunteers from a local hospital. And a few, mostly senior, volunteers in matching shirts from the “North West Brisk Walking Club” were there too.

Some edged into the bushes to pick up a couple of cigarette butts. Others found the odd tissue abandoned on a tabletop. To be honest, this clean-up day seemed like something of a misnomer. It was clean already. None of the volunteers returned with bulging sacks of refuse.

But that’s to be expected in Singapore. The country has long had an obsession with hygiene and cleanliness. And this month marks a big milestone: Founding father and first Prime Minister Lee Kuan Yew kicked off the Keep Singapore Clean campaign 50 years ago this month.

Cleanliness campaigns were already well-established by that time, but this one was different. It was the first time the government used fines as a method of social control. But Singapore’s economic advance seemed to short-circuit its initial success. By any measure, Singapore is clean. But not for the reasons you might think.

If you’ve ever walked in the same direction as a rubbish truck as it idles up the street on its daily collection here in Singapore, you immediately understand why the city is cleaned so relentlessly. The dumpster perfume really slaps you in the face.

In cities with a cooler climate, it’s probably okay to go a little longer between household collections. But in the hot, humid tropics, it’s an urgent task. Lingering household and commercial waste can be downright dangerous 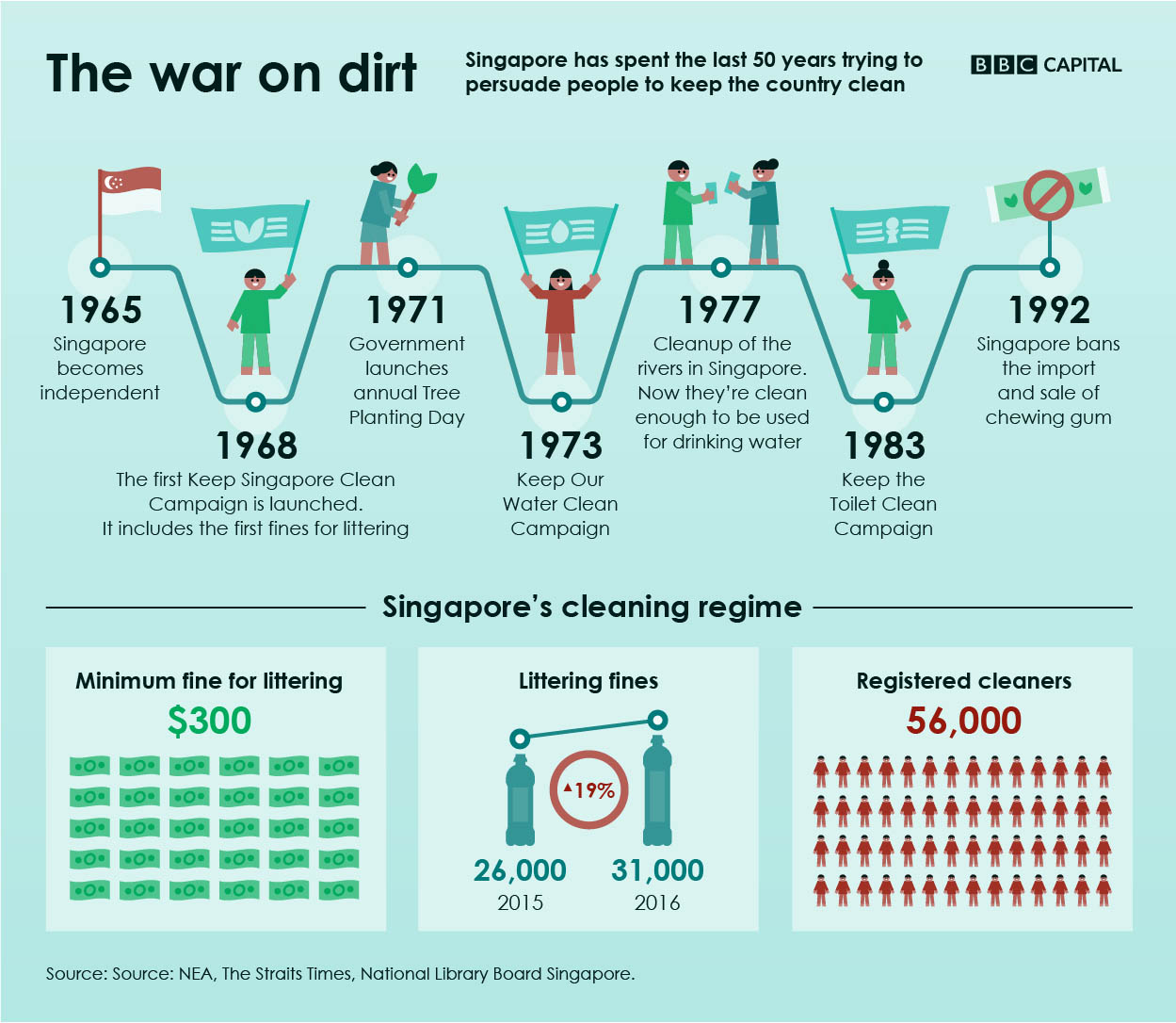 “If you have littering like you see in other countries, it can breed rodents, flies, cockroaches. They are all carriers of bacteria and germs,” said Edward D’Silva, chairman of the Public Hygiene Council. Mosquitoes are an even bigger worry. You won’t get malaria here, but in a bad year, there’ll be tens of thousands of cases of dengue.

When he introduced the Clean and Green policy, Lee Kuan Yew had loftier goals in mind. It was part of a larger push that included changes to public health laws, the relocation of street vendors into hawker centres, the development of proper sewage systems and disease control measures. At the same time, the population moved from Kampongs (Malay-style villages with wooden huts) into housing estates with better infrastructure.

“We have built, we have progressed. But no other hallmark of success will be more distinctive than that of achieving our position as the cleanest and greenest city in South Asia,” he said in 1968.

In addition to adverts, there were public education activities, lectures by health officials and spot checks by the government. There were also competitions which highlighted both the cleanest and the dirtiest offices, shops, factories, government buildings, schools and public vehicles.

Lee Bee Wah is the local MP for Nee Soon joins the clean-up day in Khatib at least once a month. She encourages her constituents to get involved (Credit: Tim McDonald)

The campaign was followed by a plethora of others. Throughout the 1970s and 1980s, there were campaigns that urged Singaporeans to keep toilets, factories and bus stops clean. The 1976 Use Your Hands campaign had students, parents, teachers, principals and civil servants cleaning up schools at the weekend. There were also numerous tree planting initiatives.

“These standards will keep morale high, sickness rate low, and so create the necessary social conditions for higher economic growth in industry and in tourism. This will contribute to the public good, and in the end to everyone’s personal benefit,” he said.

On all of these counts, Singapore has done well. Life expectancy has grown from 66 to 83 (which is third best globally). In 1967, tourist arrivals were a little over 200,000compared to a just shy of 10 million for the first three quarters of 2018. Inward foreign direct investment ballooned from US$93m in 1970 to US$39bn in 2010. It’s now the fifth largest recipient of foreign direct investment, receiving $66bn in 2017.

First Prime Minister of Singapore – governing from 1959 to 1990 – Lee Kuan Yew was the architect of the clean up campaign (Credit:Getty Images)

Nobody claims it’s all down to a single anti-littering campaign. But the health benefits are understood. It makes sense that tourists would return to a clean destination. And clean streets send a signal to foreign executives that a city is capable and adheres to the rule of law. It’s difficult to say how much, but in some way, shape or form, this campaign mattered.

As a rule, campaigns are not huge line items for departments or government budgets. Between 2010 and 2014, for example, Singapore’s National Environment Agency spent an average of $3m per year on anti-litter campaigns and outreach activities.

Discount and souvenir stores in Singapore often carry T-shirts that read: “Singapore: A fine city” followed by a multitude of things for which you can get fined. As jokes go, it’s tired – Singaporeans are more likely to roll their eyes than laugh.

But it’s not wrong. Singapore has a habit of banning what it sees as undesirable behaviour and enforcing each ban with financial penalties. The 1968 Keep Singapore Clean campaign was the first to attempt to moderate citizens’ behaviour through fines. Since then, Singapore has adopted fines with gusto. Typically, the authorities issue tens of thousands of fines a year for littering. The minimum fine is SG$300 (US$217).

The push to make Singapore spotless started during Lee Kuan Yew’s time. He would intervene personally, sending notes to his ministers or bureaucrats when he saw something out of place.  He believed that little things mattered, and worried that people would “take advantage of a slackening of the administrative grip on the situation" if smaller infractions were ignored.

There are laws on the books that have always seemed weirdly strict to foreigners. Singapore famously banned the import of chewing gum (it’s not illegal to merely possess it). There are fines for bringing durian (a pungent smelling tropical fruit) on the train and for not flushing a public toilet (mostly a moot point, given that most toilets flush automatically now).

There are also fines for spitting or for using someone else’s wifi without permission. In 2009, a taxi driver was fined for being naked in public view in his own home. Vaping e-cigarettes has already been banned.

Perhaps it shouldn’t seem so unusual. It’s true that the West certainly differs when it comes to civil and political rights, and penalties here can be extremely tough, including the death penalty for drug offences. But Singapore is hardly the only jurisdiction to show enthusiasm for fines to discourage petty offences. New South Wales in Australia collected over $172m(US$121m) in parking fines in the last financial year, while councils in the UK collected £820m in a similar period. (Parking is actually a far smaller administrative challenge in Singapore because of deliberate policies to reduce car ownership rates).

Even the broader approach has analogues in the West. George Kelling and James Q Wilson wrote the famous essay Broken Windows in 1982, which argued that a broken window “is a signal that no one cares, and so breaking more windows costs nothing”.  So the prescription was to address small infractions aggressively before they became major problems. Former New York Mayor Rudy Giuliani claimed to have reduced crime in New York with this approach.  It sounds a little familiar in Singapore.

At first, the policy worked, according to Liak Teng Lit, chairman of the National Environment Agency. A combination of public awareness campaigning and punitive measures made a difference. More people picked up after themselves. The city became cleaner.

“Singapore is a not a clean city. It’s a cleaned city – Liak

But things changed. The city became wealthier, and it became easier to use low-cost labour to clean up. Nowadays, says Liak, Singapore isn’t clean because locals fear fines. It’s clean because there’s an army of workers scrubbing it. They do the heavy lifting. More than anyone else, they keep Singapore clean.

“Singapore is a not a clean city. It’s a cleaned city,” Liak declares.

There are 56,000 cleaners registered with the National Environment Agency. There are likely thousands of independent contractors who aren’t registered. Mostly they’re low-paid foreign workers or elderly workers. Taipei, by contrast, has maybe 5,000 cleaners, Liak adds.

Edward D’Silva is frustrated about the way the rise of this army of cleaners has changed the culture in Singapore. With so many cleaners, Singaporeans came to regard cleaning up as someone else’s job. Today, Singaporeans often leave their tray on the table at hawker centres after eating a meal, because they don’t consider it littering, or they think it’s the cleaners’ job to clean up after them. (In fairness, tray return facilities were only installed in 2013.)

D’Silva says students don’t pick up after themselves either, because they’ve always had a cleaner to do it for them. It’s something the Public Hygiene Council is trying to address at local schools. Simply put, he thinks Singaporeans have had it too easy for too long, and they need to change. Liak agrees.

“The government cleans the apartment [building], right up to your corridor, typically twice a day. When you have a very efficient cleaning service, and your neighbour messes up the place, you don’t blame the neighbour, you blame the cleaner for not picking it up,” he says.

Volunteers at the Khatib clean up day although there are already 56,000 registered cleaners in Singapore (Credit: Tim McDonald)

In Japan, Australia or the UK, there isn’t the same availability of very low-cost labour to take on the cleaning jobs. In Singapore, cleaners are mostly drawn from a pool of roughly a million foreign workers as well as local aged workers. But as Singapore’s population grows and labour becomes more expensive, it simply won’t be affordable to employ so many cleaners.

Edward D’Silva says part of the original push for a cleaner Singapore was economic. Cleaning public spaces is expensive and it takes money away from more valuable pursuits. He says that’s still the case, and Singapore needs to change its behaviour fast. Singapore spends at least SGD$120m (US$87m) a year on cleaning public spaces.

“If you are able to instill and cultivate a habit whereby people don’t throw their litter anywhere and anyhow, then the money you would have otherwise spent to employ those cleaners, well, millions of dollars could have been better spent on health and education,” he said.

Lee Bee Wah is the local MP for Nee Soon. She’s at the clean-up day in Khatib. In fact, she attends at least one a month in her constituency. She’s passionate about cleaning up. She not only encourages her constituents to pick up litter when they see it, but also to speak up when they see someone littering and to report offenders to the authorities.

She says public education is every bit as important as fines. In fact, it’s quite difficult to impose fines, because it often requires an official or at least a citizen to witness the offence.

“It is better to convince them, to get them to buy in, rather than just to depend on fines,” she says.

Once a year, there’s a constituency-wide “no-cleaners day”, when every cleaner in the district puts down their broom and local citizens clean up instead. She says it’s a good example of how a community can change for the better. At the first event in 2013, volunteers picked up 1,430kg of rubbish. This year, it was just 292kg.

If there are too many cleaners and Singaporeans are too lax about picking up after themselves, she says her constituency is proof that progress is possible.