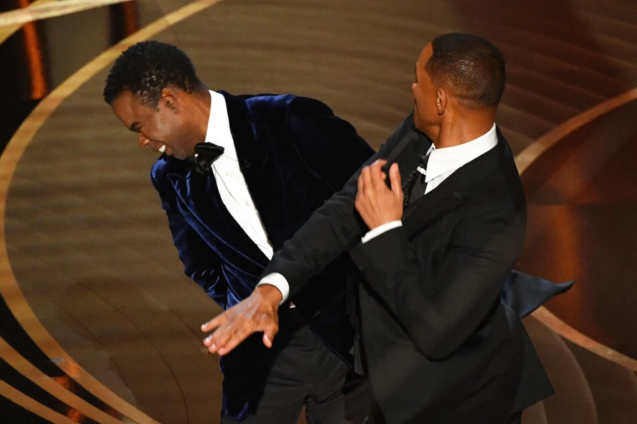 Will Smith has said his “bottled” rage led him to slap comedian Chris Rock on stage at the Oscars in March.

The actor has been interviewed for the first time since the incident, which he described as “a horrific night”.

Appearing on The Daily Show with Trevor Noah, he said: “I was going through something that night, you know?

“Not that that justifies my behaviour at all.” Smith added that there were “many nuances and complexities to it”, but added: “I just – I lost it.”

Smith stormed the stage at the Hollywood award ceremony after Rock made a joke about Smith’s wife’s shaved head. Jada Pinkett Smith has the hair loss condition alopecia.

‘I understand how shocking that was’

He had previously said his wife did not ask him to confront Rock.

“I guess what I would say is that you just never know what somebody’s going through,” he said, without elaborating on what he was referring to.

The interview on the late-night US TV talk show was the first time Smith had been publicly challenged about the attack.

“I understand how shocking that was for people… I was gone. That was a rage that had been bottled for a really long time,” he told Noah.

“That was a horrific night, as you can imagine.”

In July he posted a video on YouTube, answering questions that appeared to be written by fans about the Academy Awards. Prior to that, he had only issued written statements about the altercation.

He appeared on Monday evening’s episode of The Daily Show to promote his upcoming film Emancipation, to be released next week, making it eligible for next year’s Oscars.

Smith, who received this year’s best actor award after the slap, said the idea that his new the film would be “tainted” during the upcoming awards season by his actions was “killing me dead”.

The 54-year-old has been banned from attending the Oscars for 10 years, and has also resigned from the Academy, which organises the ceremony.

Asked in a separate interview what he would say to critics claiming it was too soon for him to be promoting his work, he replied: “I completely understand that if you know someone is not ready.

“I would absolutely respect that and allow them their space to not be ready.

“My deepest concern is my team. The people on this team have done some of the best work their entire careers, and my deepest hope is that my actions don’t penalise my team.”

DISCLAIMER: The Views, Comments, Opinions, Contributions and Statements made by Readers and Contributors on this platform do not necessarily represent the views or policy of Multimedia Group Limited.
Tags:
Chris Rock
Oscars 2022
Will Smith